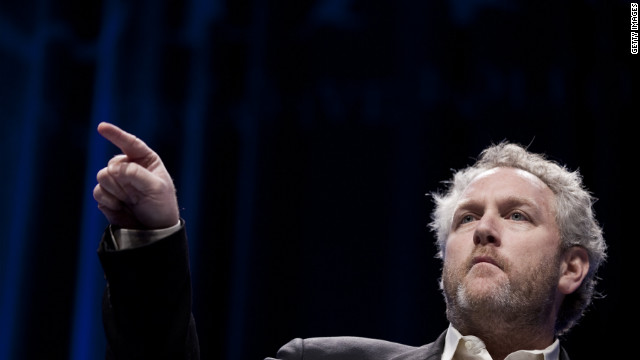 Editor's note: Nick Gillespie is the editor in chief of Reason.com and Reason.tv and the co-author with Matt Welch of "The Declaration of Independents: How Libertarian Politics Can Fix What's Wrong With America."

(CNN) -- To get a sense of just how polarizing a figure new media innovator Andrew Breitbart was, get a load of this tweet from Slate's Matt Yglesias that went out mere hours after the news of Breitbart's unexpected death at age 43 broke: "The world outlook is slightly improved with @AndrewBrietbart dead."

Breitbart would relish that sort of venomous barb, not least because it meant that liberals with an uncomplicated mainstream media perspective were taking notice of him and his point of view. That such a churlish and distasteful comment reflects poorly on its author, an establishment blogger with impeccable left of center bona fides, and his Washington Post-owned platform, would simply be icing on the cake.

As the creator of the controversial suite of "Big" sites (including Big Government, Big Journalism, Big Hollywood, and Big Peace), the man who helped put the nonprofit ACORN in the crosshairs of angry lawmakers who ultimately defunded the organization, and the reason former New York Rep. Anthony Weiner's crotch shot went viral, Breitbart didn't simply risk the ire of indignant liberals. He insisted on it, even as he was no straight-up social conservative: At the 2011 Conservative Political Action Conference, he protested the banning of the gay-friendly group GOProud by hosting a dance party featuring lesbian singer Sophie B. Hawkins. (Full disclosure: I have blogged in the past for Big Hollywood and Reason.tv posts some of our videos at Big Government.)

Anyone who tries to reduce his importance to that of a fire-breathing, ax-wielding right-wing hatchet man -- a sort of Sean Hannity Jr. - is going to miss entirely his enduring legacy to the current and future mediascape.

For years, his job was to be "Matt Drudge's bitch" (his term, which he used in a 2007 Reason interview), to prowl the Web for links both banal and profound and edit the site that more than any other showed how the Internet could be used to route around information bottlenecks imposed by official spokesmen and legacy news outlets.

From Drudge, he went on to help launch the Huffington Post of all things, named for the foreign-born, heavily accented woman who once campaigned for California's ugly, anti-immigrant Proposition 187 before embracing the gospel according to Howard Zinn, Van Jones, and Bill Maher. Widely misunderstood in its embryonic phase as the worst sort of vanity project -- Arianna Huffington's celebrity friends lecture the world about livable wages while dropping green-energy manifestos from their private jets -- the Huffington Post is in fact a marvel of open-sourced news gathering and content creation.

Though Huffington would later challenge some of Breitbart's claims about how much of her site sprung fully formed from his brow, she never stinted on the fact that he was intensely interested in creating a new way of conversing about everything that matters to people: "He was extremely interested in how to have a conversation online — how to bring together all these interesting voices," Huffington told Wired's Noah Shachtman. "Now it's, like, so obvious. But at the time, it had never been done."

He pulled off the same stunt with his increasingly influential "Big" sites -- and in a way that was more suited to his ideological leanings, which tilted not so much toward the right as they did against what he saw as inescapable and underappreciated bias and smugness in the mainstream media. As my colleague Matt Welch, a longtime friend of Breitbart, writes, "He didn't actually have strong philosophical/policy beliefs -- at all -- and he was always perfectly comfortable and perfectly welcome in ideologically and culturally diverse settings."

From the dozen or so occasions in which I interacted with him, I can attest to the truth of that statement. He had opinions as big as all outdoors and loved to argue about everything -- and on nothing more than the innate superiority of the National League to the American League in baseball (on this, as on many other topics, he was surely wrong). But the point is that he loved to argue, not to surround himself with people who thought exactly like him.

His legacy has nothing to do with whether the Republican party picked up Anthony Weiner's congressional seat or whether ACORN has been able to renew its funding. It has to do with the ways in which he created new places and spaces to talk about whatever any of us want to talk about. He told Reason in 2004 that after feeling ignored by existing outlets, "We decided to go out and create our media."

It doesn't matter who we is, kemo sabe. It's the conservatives at Drudge, the liberals at HuffPo, the leftists at DailyKos, the libertarians at Reason. It's all of us and Breitbart helped create and grow a series of do-it-yourself demonstration projects through which we can all speak more loudly and more fully.

Breitbart is dead, but the conversation pits he built will live on for a long, long time. A lot of people theorize about democratizing the public square and bringing new voices and sources into conversations about politics and culture. Breitbart actually did it. It wasn't always perfect and it wasn't always pretty (ask Shirley Sherrod, the former Department of Agriculture official who sued him for defamation), but he blazed a path that surely leads to a far richer and more interesting mediascape than the one we all grew up with.

The opinions expressed in this commentary are solely those of Nick Gillespie.