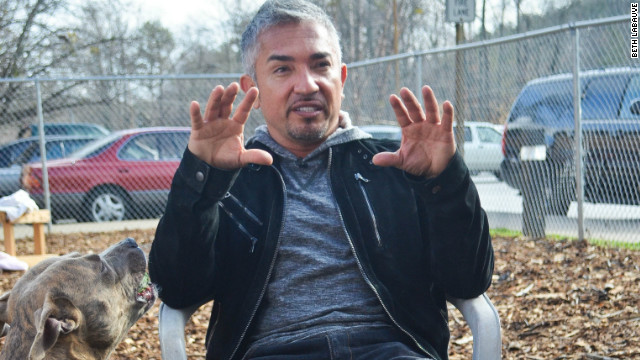 Atlanta (CNN) -- Cesar Millan has been showcasing his talents as "The Dog Whisperer" since 2004, teaching dog owners how to train their energetic and oftentimes misbehaving canines.

Millan gained celebrity status after helping stars such as Oprah Winfrey with their precious pooches, but on his Nat Geo Wild series "The Dog Whisperer," he works with everyday people.

Recently in Atlanta, Millan shared his tips for adopting a shelter dog with Sara and Casey Giessen, a married couple who recently decided they are ready to adopt a dog.

Millan strongly supports adopting pets, but he warns that taking in a shelter dog based on pity isn't in the best interest of the dog. Many people choose a dog based on emotion, but Millan recommends a different approach.

"I always suggest to people to be logical with the adoption because you get to understand compatibility and what energy are you bringing home," he said. "It's hard because most of the time people do impulse adoptions, but unfortunately those dogs are brought back more often than kept at home."

He said compatibility starts with understanding a dog's body language, beginning with the eyes.

Nabbing those who don't scoop poop

Millan accompanied the Giessens as they checked out the homeless dogs at DeKalb County Animal Control in Atlanta. Casey Giessen recounted how Millan helped explain to the couple how they should go about choosing their future pet.

"There were pictures on the cages of the dogs and he would cover the bottom of the face and he said, 'Just look at the eyes,'" Casey Giessen said. "You could tell immediately [from the eyes] that this dog was sad, extra hyper, or calm and sweet."

"That doesn't mean the dog is happy, that means the dog is excited!" he explained.

If you are considering adopting a dog, Millan said you must first assess your own energy level, then look for a dog that matches it. When a dog's energy level is higher than the owner's energy level, it can lead to problems.

"That's when you see people, when they go for a walk, they're being pulled by their dog, or when they open the door, just to answer the doorbell, the dog gets to the door first," he explained.

Next, he said future dog owners need to consider how they will set boundaries and limitations for their pet.

The Giessens, who described their energy level as medium, found a small lab mix at the DeKalb shelter that they liked. After observing them together, Millan said he believed she was a compatible dog for the couple. The couple later noticed the dog shedding quite a bit, so, because Sarah has allergies, they decided to continue their search using the advice Millan has shared.

That, according to Millan was the right decision.

"My goal was to teach them a little bit more than what they knew," Millan said. "And what they adopt today was knowledge, maybe not a dog yet, but when they adopt a dog, it will be the right dog for them because they will do it with knowledge."

Millan said after you have adopted a shelter dog, the first thing you need to do before bringing your new pet home is take it for a long, one- to two-hour walk.

"It's like his vacation. It's almost like you're really welcoming him by removing physical energy," Millan said. "Then you bring him home. Immediately, before you give affection, you tell a dog where he's going to sleep or stay. You begin practicing separation so you don't have separation anxiety in the future."

Millan said the hardest thing for a dog to learn is how to be away from its family.

Most of the time people do impulse adoptions, but unfortunately those dogs are brought back more often.
Cesar Millan, dog trainer

"We go to work, kids go to school, at one point he will be by himself," he explained. "So, it's best to introduce him to how his life is going to look like in the future from day one. So you don't catch him by surprise."

Understanding dog behavior is key to creating a lasting relationship with a dog, Millan said.

Several weeks after their shelter visit , the Giessens saw a dog available on Facebook. They were drawn to his cute looks and his big ears, but they reminded themselves of Millan's tips.

"We kept saying to each other, we can't get him just because he's cute," Sara Giessen said.

They found the dog at Georgia Society for the Prevention of Cruelty to Animals, which has a "spend the night" program. They were allowed to bring the dog home for a night, which sealed the deal.

"We were really surprised because at the shelter he was really hyperactive," Casey said. "We got him home and he was really chill."

The Giessens credit Millan's advice for leading them to the right dog, which they named "Beans."