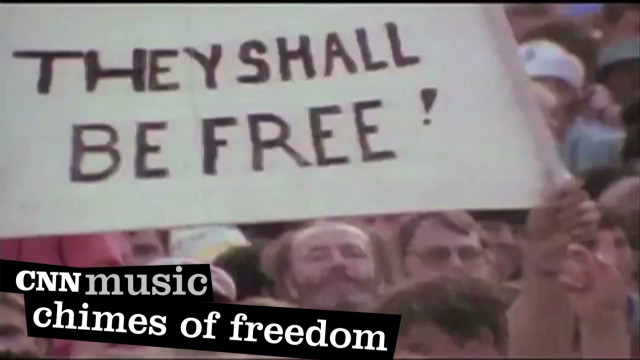 (CNN) -- A compilation album commemorating the 50th anniversary of the human rights organization Amnesty International features some musicians you might expect: activist artists like Sting, Elvis Costello and the Dave Matthews Band. But it's the singers you wouldn't expect who are causing the biggest stir: namely, Miley Cyrus and Ke$ha.

Even more surprising? The pop princesses join 80 or so fellow musicians in offering their renditions of classic tunes by the venerable Bob Dylan.

On the four-CD collection, "Chimes of Freedom: The Songs of Bob Dylan Honoring 50 Years of Amnesty International," Cyrus sinks her teeth into "You're Gonna Make Me Lonesome When You Go" from the legendary songwriter's 1975 album, "Blood on the Tracks."

Ke$ha's sparse cover of Dylan's 1963 recording "Don't Think Twice, It's All Right" has found a fan in Rage Against the Machine's Tom Morello, who admits it's one of his favorite cuts on the compilation. Morello himself contributes a haunting take of "Blind Willie McTell" under his solo alter ego, the Nightwatchman.

"It's been my dream to be on a record with Miley Cyrus and Ke$ha, and I commend them," the guitarist said with a hint of a smile. "I, too, am nondenominational in my activism. If you're down for the cause, then the Nightwatchman is down with you."

"I think that Amnesty International believes in everything Bob Dylan stands for," added Ziggy Marley, who puts a reggae twist to "Blowin' in the Wind." "The best way to honor what he has done is not by imitating it but translating it into your own voice."

In 1962, Amnesty International evolved into a movement advocating freedom, justice and human dignity for people around the globe. That same year, Bob Dylan released his self-titled debut album for Columbia Records. Over the course of the next half-century, he has chronicled social issues and the human condition with an empathetic voice.

Even though Joe Perry has enjoyed a lengthy career with Aerosmith, he has yet to meet his fellow Rock and Roll Hall of Fame inductee, despite donating a bluesy version of Dylan's "Man of Peace" to the Amnesty project.

"He's the enigmatic Bob Dylan, and I've never crossed paths," Perry confided. "A good friend got me a signed 8x10 for my birthday. It says, 'To Joe, keep your hands on the wheel. From Bob.' It's one of my prized possessions."