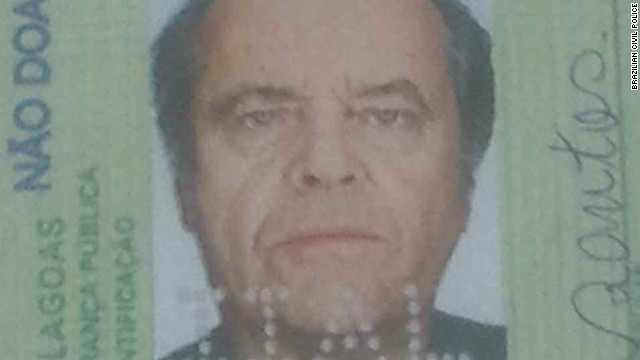 (CNN) -- Some people just can't handle the truth. Others have a tough time with the lies, too.

Civil police in the northeast Brazilian city of Recife arrested Ricardo Sergio Freire de Barros after he tried to open a bank account using a fake ID with a picture of Jack Nicholson.

Just a small problem: the 41-year-old Barros looks nothing like the 74-year-old Oscar-winning American actor, one of the most-recognizable men in the world.

Nicholson has been nominated for an Academy Award 12 times, and has won the Best Actor Oscar twice -- for "One Flew Over the Cuckoo's Nest" and for "As Good as It Gets." He also picked up an Academy Award for Best Supporting Actor for 1983's "Terms of Endearment."

He said the suspect was using the fake IDs to open bank accounts and credit cards with high limits, and then defaulting on the debts. He also took out a business license.

When Barros was arrested, he had six different IDs and various checkbooks and credit cards, police said.

To his credit, Barros didn't use Nicholson's name, instead signing the card Joao Pedro dos Santos.

He's charged with use of false documents and falsification of a public document.

Barros is being held in jail awaiting trial.