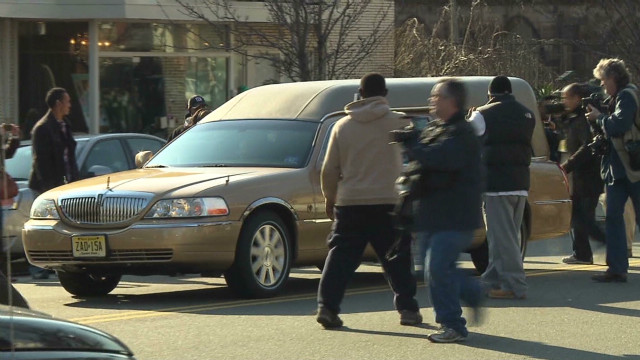 Editor's note: Guthrie P. Ramsey Jr. is the Edmund J. and Louise W. Kahn Term professor of music at the University of Pennsylvania. He is the author of "Race Music: Black Cultures from Bebop to Hip-Hop" (University of California Press). His new CD is "The Colored Waiting Room."

Like many of us living in the digital age, I learned that the pop diva passed away by way of text message. Sent by my 25-year-old daughter, the announcement shocked me but soon triggered fond memories of the days when she and her younger sister would belt out Houston's latest hit along with the radio. Their voices were unleashed in that gleeful, full-throated and uninhibited way that only pre-teen girls seemed to do. (Imagine "and I-eee-I-eee-I will always love you" at earsplitting, hilarious volume).

A few of the high notes were clearly out of my girls' easy reach in their spontaneous renditions. But they reveled in emulating Houston nonetheless.

I've heard plenty about Houston's troubles during the course of the week. Despite her battles with drugs and alcohol, many people have good memories of her and her songs.

So what made "The Voice" so glorious in the transcendent musicianship that Houston displayed in her recordings and concerts?

Houston possessed the perfect vibrato. This effect was facilitated by her deceivingly effortless diaphragmic support. Houston belted out chorus after chorus on hit after hit, demonstrating white-knuckled control over this parameter of her "singer's toolbox" with an aplomb that seemed unfair to lesser vocalists. And the sheer stamina it took to achieve this elusive aspect of a singer's art separates the wannabes from the real McCoy.

Never noticed that, right? That's because she was so good at it.

Houston was famous for having a very wide range. Some of her songs spanned quite a bit of vocal territory, from alto to the highest soprano. What was remarkable is that she hardly ever "bailed out" by flipping into a falsetto voice -- you know, that head-buzzing sound that men emit when they're doing bad imitations of female opera singers.

Houston seemingly had no natural break between the high and low registers of her instrument. This unique quality was highlighted because when she did flip into the "head voice," it was employed as a subtle garnish, a precious design element in a phrase. Her impeccable intonation -- just one of the reasons her "Star-Spangled Banner" has become iconic -- instilled a "trust" in her listeners. When every note is perfectly in tune, as they were in a classic Houston performance, we relaxed and gave in to the sheer beauty of music.

Jackson: 'We feel such awesome pain'

Beyond the gift of her instrument, Houston's musicianship comprised an uncanny way of handling the material she was given with such expertise and attention to detail that the songs became hers and hers alone.

Her sense of musical balance allowed her "crowd" the cadences of a song's key passages with "just enough" sonic information before landing coyly in the next structural part of the song. Although her work grew more melismatic as her career progressed, she never overused this technique like some of her myriad imitators. She mostly executed them in clever twists at the ends of phrases or tossed them off with stunning ease between plainly rendered melodic statements. This allowed many of us to sing along with her at full voice, by ourselves, in the car. (Surely, we've all done this).

And she made us feel it.

Through musical economy and powerful execution, Houston could shape the emotional contour of a song whether in long concert-versions or on a four-minute record. Her exquisite beauty together with that "come hither/don't take another step closer or I'll call my cousin" camera presence intrigued us.

What charisma she had. Certainly, this infectious package of beauty and talent was at least one of the reasons my youngest daughter, now a budding operatic coloratura soprano, is pursuing a life of long, beautiful gowns and very, very high notes. Miss Whitney's ubiquity in the media made that seem like a reasonable dream for many of the young women she mesmerized.

Houston became a pop star the old fashioned way -- not through a virile YouTube video or as a contestant on "American Idol."

She was discovered, given a record deal, provided material and the rest was lots of hard and endless work. Now that she's gone, we can do nothing but remember: Remember how she and "the voice" seemed like two separate entities. Remember how she performed that voice; how she allowed us to witness it, how she obviously enjoyed it herself.

In the end, the voice just couldn't keep up with the extravagances and toils of her life in the spotlight.

The opinions expressed in this commentary are solely those of Guthrie P. Ramsey, Jr.