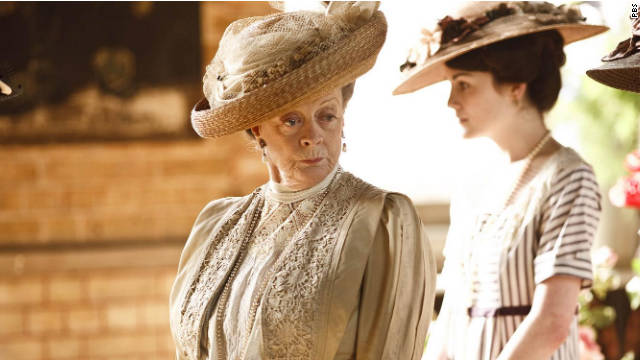 Nicolaus Mills says "Downton Abbey" is more than just another period drama about the British aristocracy.

Editor's note: Nicolaus Mills is professor of American studies at Sarah Lawrence College and author of "Winning the Peace: The Marshall Plan and America's Coming of Age as a Superpower."

(CNN) -- Americans love a period drama, and they dote on the British aristocracy. That's the way the popularity of "Downton Abbey," the British television series that drew 5.4 million viewers for the finale of its second season on PBS, is being explained these days.

It's an explanation that reflects our television history. In the 1970s, the British series "Upstairs Downstairs" was wildly popular on PBS. "Downton Abbey," which this season took place during and after World War I, covers much of the same social territory in following the trials of the fictional Crawley family, headed by Robert, the earl of Grantham.

But in addition to the brilliant acting of a cast led by Maggie Smith and the script of Julian Fellowes, who wrote the 2001 Oscar-winning screenplay for "Gosford Park," there is another explanation for the success of "Downton Abbey": its compassion.

The earl of Grantham, played with enormous subtlety by Hugh Bonneville, doesn't look like a democrat or speak like a democrat. When crossed, he even displays an imperious temper. But appearances are deceiving when it comes to Lord Grantham's character. The earl treats those who work for him with a compassion that goes well beyond noblesse oblige. He regards the World War I deaths of those who once worked on his estate as a family tragedy.

The fictional earl of Grantham is the antithesis of the typical real-life aristocrat of his generation who, as Margaret Powell pointed out in her classic servant's memoir "Below Stairs" (just republished by St. Martin's Press), had little interest in the well-being of those he employed.

In "Downton Abbey," the earl hires as his valet his former orderly from the Boer War (whom he greets as "my old comrade in arms") despite the difficulty the orderly, the victim of a war wound, has in walking. He comes to his butler's rescue when the latter is being blackmailed, and when his third cousin, the heir apparent to the Crawley estate, finds the services of a personal servant redundant, the earl reminds his cousin that the servant needs work.

The earl is everything so many of today's get-tough-with-the-poor politicians are not. His actions, governed by his belief in an unstated social contract, make it easy to see how by the 1930s someone like Lord Grantham could morph into a liberal economist like John Maynard Keynes.

Whether the decency of Lord Grantham and the popularity of "Downton Abbey" are signs that popular support for President Obama's version of the social contract will aid him in his re-election bid is anyone's guess. But at a time when the Pew Research Center, as well as Occupy Wall Street, shows that Americans perceive a strong conflict between rich and poor, it is not farfetched to see "Downton Abbey" delivering a history lesson suited for the present.

No president in American history was as much of an aristocrat as Franklin Roosevelt, with his 17th-century Dutch ancestry, his Hyde Park estate and his Groton-Harvard education. Yet Roosevelt was elected president a record four times, and at the core of his popularity was his belief, passionately stated in his second inaugural address: "The test of our progress is not whether we add more to the abundance of those who have much; it is whether we provide enough for those who have too little."

Roosevelt's opponents called such beliefs class warfare. Roosevelt thought otherwise, and so, America's television audiences have grasped, does Lord Grantham. The earl's stiff collars and regal bearing can't hide how relevant to the current moment his social values are.

The opinions expressed in this commentary are solely those of Nicolaus Mills.