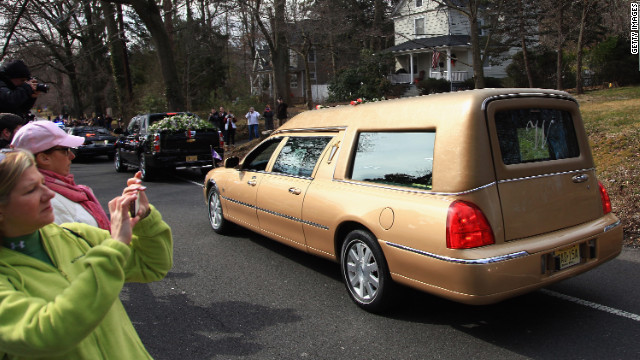 The hearse carrying the body of singer Whitney Houston arrives for her burial service Sunday in Westfield, New Jersey.

For complete coverage of Whitney Houston's death, tune in to CNN and HLN.

Her burial brings an end to her "coming home," as her family dubbed the invitation-only memorial service held a day earlier at her childhood church in Newark.

The family-only burial is in contrast to the emotionally charged, star-studded memorial service held at New Hope Baptist Church, where Houston, nicknamed "Nippy," was soloing in the junior choir by age 11.

"Jesus Loves Me" was the last song Houston sang in public before her death on February 11 in Beverly Hills, California, at the age of 48.

So it was fitting that the mourners -- comforted and encouraged by the likes of Stevie Wonder, Alicia Keys and R. Kelly -- heard the simple, but powerful, "Jesus Loves Me," this time performed by CeCe Winans.

Stevie Wonder: Not the time to be cynical

The mourners inside the church represented an amalgamation of Houston's life, from childhood friends to gospel singers, from music stars to movie stars.

"You literally felt like this was just a girl from New Jersey who had a few famous friends, and it was such a celebration of life," CNN producer Raelyn Johnson, who attended the funeral, said Sunday.

"It is the same church service that will go on in so many churches across the country this morning ... and it was celebration, it was singing, it was praise for three hours." Johnson said. "And it wasn't until the very end that you remembered that this was a funeral and a very sad day for a lot of people."

Kevin Costner, who cast Houston in her first role alongside him in "The Bodyguard," recalled how she questioned whether she was good enough, beautiful enough to be cast in the film.

"It was the burden that made her great and the part that caused her to stumble in the end," he said.

For her closest friends inside the church, and strangers who continue to draw inspiration from her voice, Costner's words hit a painfully honest note about human frailty.

Years after "The Bodyguard" hit theaters, reports of Houston's struggles with drug addiction and a rocky marriage with Bobby Brown surfaced and her album sales declined.

"The inexplicable burden that comes with fame," Costner said. "Call it doubt. Call it fear. I've had mine. I know the famous in the room have had theirs."

Costner said Houston's own story could help a new generation of young girls who dream big.

"Maybe they're thinking they aren't good enough," he said. "I think Whitney would tell you: Guard your bodies. Guard the precious miracle of your life. Then sing your hearts out, knowing that there's a lady in heaven who's making God himself wonder how He created something so perfect."

One of the most emotional moments in the service came when Keys recalled how Houston helped her and others achieve success.

Keys ended her tribute to Houston by singing "Send Me an Angel," her voice soaring into the rafters of the sanctuary.

Houston's former husband, Bobby Brown, also arrived at the service but left soon after. Brown walked by Houston's casket with his head down before the service began and then left. Brown accused security of treating his family badly and barring him from visiting with his daughter, an account that Houston's family denied.

Brown was expected to attend with two guests but showed up with 10 people and sat in a section reserved for family, a close friend of the Houston family told CNN on condition of anonymity because of the sensitivity of the issue.

When Brown refused to reseat his entourage to make room for Houston's mother, the family asked police to intervene, the family member said.

Mourners heard only a few indirect references to her personal battles.

At the time of her death, Houston was in the Los Angeles area for the annual Grammy Awards and was to attend a party hosted by her longtime mentor and record producer, Clive Davis. She was discovered dead in her hotel suite at the upscale Beverly Hilton.

Investigators are contacting doctors and pharmacies across the country, seeking answers about prescriptions found in Houston's hotel room and whether they played a role in her death, a source with knowledge of the investigation recently told CNN. The source spoke on condition of anonymity citing the ongoing investigation.

Houston's death certificate is only fueling speculation after coroners deferred making a determination as to the cause of death pending the outcome of toxicology tests.

The investigation also sparked questions on her behavior during her final days, with authorities examining video from her television appearances as well as other reports to determine her physical state leading up to her death on the eve of the Grammy Awards, the source said.