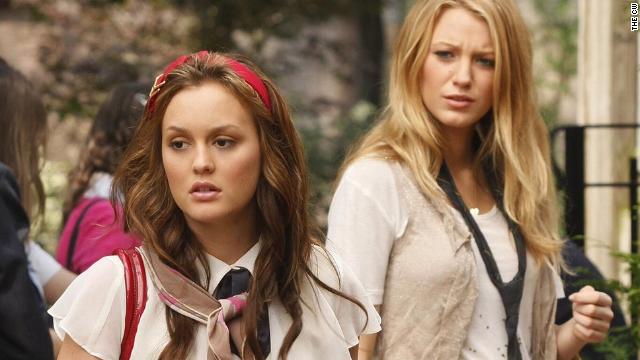 (CNN) -- A TV series' 100th episode signifies success and, in most cases, a profitable afterlife in syndication.

Shows like "Seinfeld" and "Friends" coasted past their centenary episodes, leaving fans wanting more. But it's not just ratings juggernauts that reach the milestone.

"Gossip Girl's" climactic 100th episode aired on Monday, reminding dedicated fans why they've held on for so long, and, by the same token, alerting former viewers of the show's protracted life.

"They can trot out a cake with 100 candles on it, but let's be honest, ('Gossip Girl's') ratings have been terrible for years," said Matt Whitfield, the features editor at Yahoo.

The CW drama hasn't attracted more than 1.5 million viewers during its Monday night timeslot since the fifth season kicked off in September. During its first season, which premiered in 2007, episodes of "Gossip Girl" routinely garnered more than 2 million viewers -- a feat for the younger-skewing network.

And despite disappointing ratings, "Gossip Girl" executive producer Stephanie Savage told The Hollywood Reporter that they're not writing a series finale anytime soon.

"The actors' contracts expire at the end of next season, so that feels like probably an organic ending point," Savage said.

Perhaps it's because the series, based on Cecily von Ziegesar's novels of the same name, isn't playing hard to get.

"Gossip Girl" doesn't need 24 episodes each season, Whitfield said. Networks can learn from the model employed by HBO's "Game of Thrones" and AMC's "The Walking Dead," he added. They need to minimize the number of episodes airing each season.

The show's creator, Josh Schwartz, has taken heat for this in the past. His Fox drama "The O.C." lasted four seasons -- just short of the 100-episode mark -- before getting canceled in 2007.

Many viewers have argued that "The O.C.'s" jumping point occurred when Mischa Barton's character was killed off at the end of season 3.

Of course, it's easy for a high quality show that's won a ton of awards, like "The Sopranos," to go out on top, Whitfield said, adding, "Other shows on network TV will try and wring out every dollar ... they possibly can. It's always happened that way."

Take, for example, ABC's "Desperate Housewives" and "House" on Fox, he said. At one point, both shows dominated ratings and awards shows. Now, with both programs currently in the midst of their eighth seasons, viewership has greatly diminished.

After hitting a ratings rough patch last season, ABC's "Grey's Anatomy," on the other hand, is currently experiencing a resurgence in its eighth season.

Many primetime soaps experience hills and valleys, Whitfield said. Unfortunately for "Gossip Girl," the next hill might be out of reach.

"To wait five seasons before marrying Blair off and announcing who Gossip Girl is, you've missed the boat," he said. "They were starting to throw in these gimmicks too late in the game."

But The CW, Schwartz and Savage have another trick up their sleeves. They're working to bring "Sex and the City" prequel "The Carrie Diaries" to the small screen.

Whitfield says only the really great shows will make it to syndication and last there.

"Will and Grace" and "Law and Order: Special Victims Unit," he said, "will forever be in syndication because people still tune into them." A show like "Gossip Girl," he added -- not so much.

"There are too many options on TV. ... And with people flipping around the Internet ... Ratings have been dropping across the board," he said. "There are shiny, bright new things out there to try."