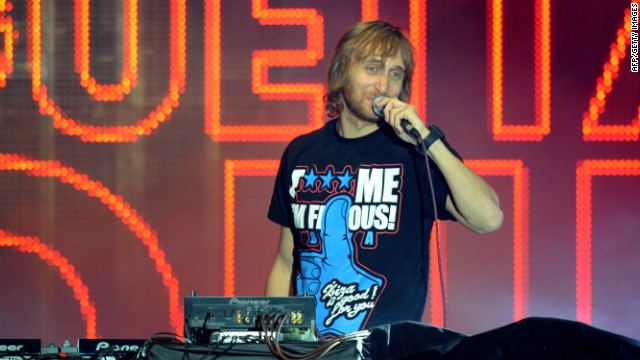 DJ David Guetta performs at a music festival in July 2011.

(CNN) -- "DJs are the new rock stars," Simon Cowell recently declared when announcing that he -- along with Will Smith and Jada Pinkett-Smith -- will be developing a new reality competition to find the next great DJ talent.

While the former "American Idol" and current "X Factor" judge is known for his provocative statements, he's not usually wrong.

And it looks like this time is no exception.

One of the most anticipated races at the 54th Annual Grammy Awards this Sunday is among the dance/electronica artists, including chart-topping DJ and producer David Guetta (Black Eyed Peas' "I Gotta Feeling"), festival and stadium headliner Deadmau5, and the year's breakout star, Skrillex.

Skrillex (born Sonny Moore), the 24-year-old dubstep producer best known for his album "Scary Monsters and Nice Sprites," is the first-ever DJ nominee in the best new artist category, where he's up against Nicki Minaj, The Band Perry, Bon Iver and J. Cole. He scored a total of five Grammy nominations, more than the biggest pop acts like Lady Gaga and Katy Perry combined.

Adele the belle of the Grammy ball

"I almost don't even know what it means in terms of the big picture," he recently told MTV News.

"This whole year has been insane, and these are surprises beyond my wildest fantasies because we've come a long f---ing way, man. People didn't believe in us and it's pretty awesome just to get that acknowledgment."

But Skrillex admits he's not in it for the glory. "If I didn't get (these Grammy nominations), I would still do the same exact thing," the DJ said in a chat with Artisan News. If I were to win a Grammy, I just hope it opens doors to everyone else that's amongst my peers and the people I've grown up doing this with."

Despite his newfound success, not everyone "gets" Skrillex. Reactions to his music range from generation-based bewilderment to genre purists' outright hatred. "A few hundred people might be b----ing on a message board, but you can go to a festival and find 100,000 people dancing to my music," he said. "No one gives a f--k."

In the best dance/electronica category, Skrillex's "Scary Monsters and Nice Sprites" will compete against Deadmau5 (born Joel Zimmerman) and the house grooves of his "4x4=12" and Guetta's "Nothing But the Beat," which spawned ubiquitous club songs featuring Rihanna, Usher and Nicki Minaj among others. Rounding out the nominations is artist Robyn for "Body talk, Pt. 3."

Those who follow the genre definitely have their thoughts. Doug Elfman from the Las Vegas Review-Journal put his chips down for Deadmau5.

"Deadmau5 is, at this point, the big dog of DJ-producers," Elfman wrote. "The guy makes phenomenal songs in the studio, and he sold out to capacity this year during DJ gigs at Encore Beach Club (a fair set) and at Body English at Hard Rock (a terrific set)."

And, in another first for the genre: Guetta and Deadmau5 will be performing live in a special electronica/dance segment on the Grammys stage alongside Foo Fighters (their single "Rope" was remixed by Deadmau5) and "Nothing But the Beat" collaborators Lil Wayne and Chris Brown.

Guetta, the veteran of the of the new crop of rock star DJs, with countless radio hits and two past Grammy wins already under his belt said, "I'm very happy that not only me, but also the dance community and DJ culture is getting a lot of attention in America now finally. It's wonderful. It's becoming a big deal and I'm happy about it."