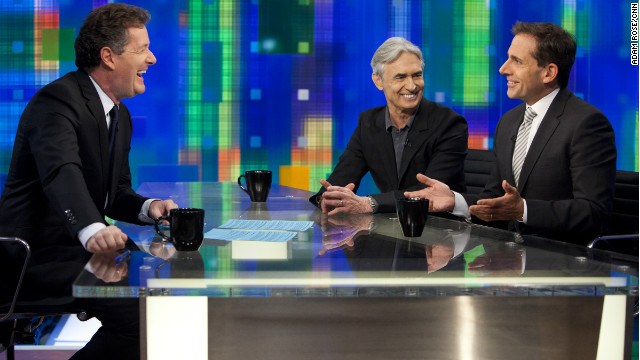 (CNN) -- When Piers Morgan asked Steve Carell and David Steinberg about comedians' handling of Election 2012, the CNN host noted that there have been quite a few "fantastically funny" moments in the GOP race in particular.

"Do you thank God every day that these things happen?" asked Morgan.

"Yes," answered Carell, "This is a gift from God to comedians the likes of which we have never seen."

"It's a ship of fools that is -- it's just unbelievable," said Steinberg. "I used to have a theory that I took almost through all the presidencies. And it was that you're either -- it's like the Three Stooges. You're either a Moe, who's in charge, or a Larry, who wants to be a Moe, or you're Curly, who is nuts and totally just off the page."

Steinberg and Carell are guests on Thursday's "Piers Morgan Tonight."

The New York Times recently hailed Steinberg, a TV director, as "a comic institution." Among his credits are "Friends," "Seinfeld," "Mad About You," "Newhart," "Weeds" and "Curb Your Enthusiasm."

Steinberg's latest project, "Inside Comedy," is a joint venture with Carell. The documentary-style series about comedians airs Thursday nights on Showtime.

Steinberg called the new series "unique in the way in which the comedians talk about what they do. ... There is no audience. There is no pressure. They're not on, but they're funny."

On "Inside Comedy," the featured comedians talk about their childhood comedy heroes, among other things. Carell, who called the entertainers' comedic influences "a matter of personal taste," counted Peter Sellers, Steve Martin and Jack Lemmon among his influences growing up.

Each episode of "Inside Comedy" is a standalone documentary. Episode four, in which Billy Crystal will be interviewed, airs Monday night. It also features Brad Garrett and Martin Short.

Steinberg conducts the interviews in the half-hour series.

"I think David is the best interviewer because he puts people at ease," said Carell. "Only because, you know, you have all of these people who do tend to be on a lot. But he puts them in a comfort zone and allows them to not only be funny, but to be themselves. So you find out a little bit more about them in a personal way, which I think is great."

Steinberg also noted that "Inside Comedy" sets out to debunk certain myths about stand-up comics. One such myth: Comedians have to be so-called wounded souls to achieve success.

Steinberg and Carell pointed out that "Seinfeld" helped break that barrier and also made it socially acceptable to be a comedian.

"When I started out," Steinberg said, "being a comedian was not a great thing. If your girlfriend brought you home to your mother and said he's a comedian, they wouldn't be happy about it. But now, it's become corporate with 'Seinfeld.' "

"A lot of young people make the mistake of going into comedy just because it's a lucrative business, as opposed to earlier, even Steven and I, we were in 'Second City,' we never... thought of going beyond 'Second City' in Chicago."

"If I could trap you both on a desert island separately," asked Morgan, "and you could have one comedian with you to make you laugh for the rest of your days, who would you take?"

Carell said he would take Alan Arkin "because he makes, one-to-one, he makes me laugh more than anyone I've ever met ... he's so dry and so acerbic. I love being around the man."

Steinberg said he would take either Groucho Marx, whom he referred to as "acerbic" and "fun," or Martin Short, who he called "nonstop funny all the time."

Morgan pointed out that when "The 40-Year-Old Virgin" was released, Carell was catapulted into an "international comedic superstar" although he did have a successful career in comedy beforehand.

Carell, who has two young children, said that his life didn't change all that much and that he still goes to the movies and the mall like anyone else.

"I certainly have more money than I did," Carell said, "but my home life, my family life, all of that really has stayed essentially the same."

Carell said success coming relatively late in life for him was a good thing because "I sort of had my ducks in a row at that point. I had figured things out, for the most part, in terms of my goals and my wants and dreams and what was giving me happiness, ultimately. So I think if it had happened early in life, I don't know if it would have been the same story."

When Morgan asked Carell about "The Office," he referred to Ricky Gervais as "the monster that spawned all this," and noted that Carell's version of the role was "more empathetic."

For his version of "The Office," Carell felt that the cliche about television audiences inviting TV characters into their homes every week rang true in this case.

Carell, who starred in the American version of "The Office" on NBC for seven seasons, called Gervais' version "excellent," noting that Gervais knew going into it that the British version of the office would only last for 13 episodes, as is common with UK television series.

"He knew that the run would be limited," said Carell, "and he could play this guy that was just insufferable and a truly terrible person."