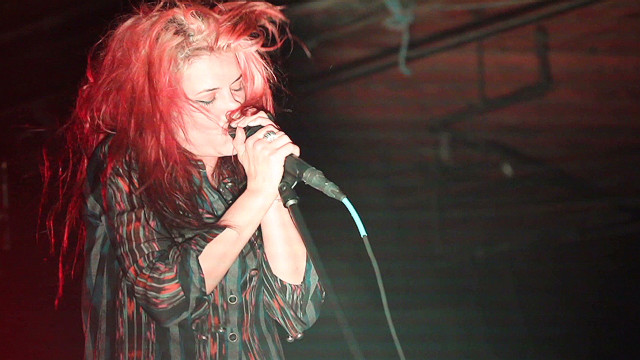 The Kills: 'The go-to band for crack'

(CNN) -- The Kills celebrated the 10th anniversary of their first live gig with a concert/blowout party in New York this past weekend. Other rockers might not remember the exact date of their first gig, but it's easy for singer Alison Mosshart to recall: She has the date tattooed on her hand.

You probably haven't heard the Kills on the radio. But you may have heard their songs on TV shows like "House," "True Blood," and "Cops" and not known it. And if you're into more mainstream rock, or celebrity gossip, you've probably read about Mosshart and co-Kill Jamie Hince for other reasons.

Despite their busy lives outside the Kills, Mosshart and Hince still passionately focus on the band that changed their lives. Hince said when the duo started as "an odd two-piece social group ... I think our souls knew we would still be doing it [10 years later], but I don't think our brains did."

"This band might never be a global phenomenon, but it's the most successful thing in the world to me," Hince said.

Serendipity brought the two together. When Florida native Mosshart was touring Britain with her band, they stayed in a London flat that happened to be below Hince's apartment.

"I'd be making a noise, playing guitar and stuff, and unbeknownst to me, she was outside my window, listening," Hince recalled, "When we actually first spoke, she probably knew a lot more about me than I realized, because she'd been sort of listening to me playing for about a week."

Mosshart soon moved to London to join forces with Hince, but there was one problem: She didn't play an instrument.

"We presumed we would be a normal band with this orthodox band set up, with a drummer and a keyboard player and a bass player," Hince said. "While we were talking about it, we'd also be writing songs together. Then, we'd talk further about what kind of drummer we wanted. Then, we'd play some more music. A week would go by, and two weeks. Then, a month, and two months. And we'd got a mountain of songs and we listened back to ourselves, and it sounded like a band, and we just stopped talking about meeting other people."

Mosshart said sounding like a band wasn't so easy at first, "He kind of had to re-learn guitar entirely because of me, because we were a two-piece band and I didn't know how to play anything. So, he had to develop this guitar style that was like playing bass and guitar at the same time to compensate for me."

Ten years later, Mosshart plays guitar, drums, and keyboards in concert, as well as ferociously prowling the stage as the lead singer.

While the Kills are incorporating two drummers into some songs on their current tour, they play many tunes the way they're created on record, with just the two Kills and a drum machine. Mosshart worries that opens up a lot of possibilities for error on stage.

"Two of us playing to a drum machine is like walking a tightrope, because if you take the wrong turn at any point, you're off, and you're off somewhere all by yourself ... and that's kind of it for the song," she said.

Despite those fears, you shouldn't expect to hear ornate orchestration in any Kills songs anytime soon.

"I think it's more important what you leave out of a song than what you put in it," Hince said. "The only thing you need on a song is that attitude and that burning electricity. You don't need layers of music or, you know, a thousand drums, or string sections. You don't even need an electric guitar to be electric."

"I think that minimalist sound is really attractive to us, just kind of instinctually," Mosshart added. "We'll try a lot of things and we usually get rid of almost everything. We just kind of leave the stuff that we think is important, because it sounds the best to us."

That minimalism has been a hallmark of edgy rock bands for more than 45 years, since the Velvet Underground, the "house band" for Andy Warhol's Factory in the '60s, "created" the sound.

When Hince and Mosshart first met, they bonded over a shared love of the Warhol scene.

The Kills display multimedia skills, producing artwork and photos for their CD jackets, creating pamphlets of Polaroids to hand out at concerts and even generating the concepts for many of their music videos.

The disturbing video for 2008's "Last Day of Magic" depicts the couple beating each other in back alleys and bedrooms. A lot of articles over the years have alluded to sexual tension between Hince and Mosshart, but both insist romance has never been part of their dynamic.

"I think it's really difficult for people to see a friendship -- not just a friendship between a man and a woman, but a creative, productive relationship. People do find it really hard to see that it could be possible, without there being some kind of regular love interest around it," Hince said. "I always wanted to be in this kind of creative, artistic relationship that was beyond anything else, and it's like we willed it. We kind of yearned for it and we willed it, and we got it."

They also yearned for -- and are getting -- more mainstream recognition.

"It's incredible when you go somewhere like South America and kids are going bananas to you and you've never been there before," Hince said. "Equally, when Rolling Stone names this band I still see as this little sort of underground band, names [the Kills' latest album Blood Pressures] as one of the best albums of [2011], it means the world to me."

"I have this very strong feeling that we need to be part of the world," Mosshart said. "If you're not, what are you doing?"