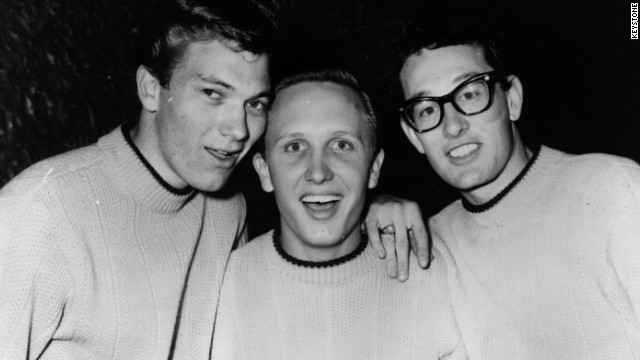 Buddy Holly, shown here in the extreme right, poses with The Crickets, Jerry Allison and Joe Mauldin in 1957.

(Rolling Stone) -- The Rock and Roll Hall of Fame will make up for past oversights at this year's induction ceremony by admitting the backing groups of six first-generation rock stars.

In each of these cases, the backing group failed to get into the Hall of Fame at the same time as their frontman - sometimes causing a great deal of controversy. The Hall of Fame's failure to induct the Miracles along with Smokey Robinson in 1987 caused a particularly large uproar. Hall of Fame rules state that artists are eligible for induction 25 years after their debut release. At the time, Robinson had been a solo artist for only 14 years.

The six groups will be inducted April 14 at the Rock and Roll Hall of Fame's annual ceremony at Cleveland's Public Hall.

"These Inductees are pioneers in the development of the music we call rock and roll," the Rock and Roll Hall of Fame's president and CEO Joel Peresman said in a statement. "As part of our mission to recognize the most impactful, innovative and influential artists in rock, the committee brought forth these six groups that belong in the Hall of Fame."

See the full article at RollingStone.com