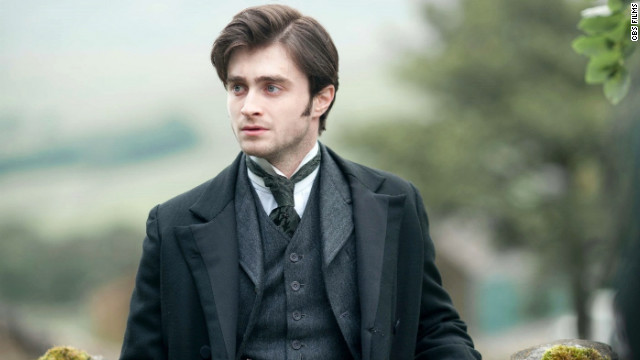 "The Woman in Black" stars Daniel Radcliffe in his first big screen outing of the post-"Harry Potter" era.

(EW.com) -- An old-fashioned, tastefully constrained supernatural thriller, "The Woman in Black" embraces the elements of gothic horror movies with pleasing seriousness: If there's a door handle to rattle or floorboard to creak in the ruined mansion at the heart of the story's trouble, this production pauses for the sight and sound.

And gray English skies with a likelihood of thick English mist is the unchanging weather forecast. The upside is, this classically creepy, unironic tale of loss and vengeance, based on Susan Hill's popular 1983 novel of the same name, pays fair homage to the kind of fare that has long been the specialty of the recently revived British company Hammer Films, where Christopher Lee once reigned as Count Dracula and Peter Cushing personified Baron Frankenstein.

The downside is, "The Woman in Black" devotes an awful lot of time to the sight of Daniel Radcliffe, playing a sad, frock-coated lawyer named Arthur Kipps, creeping anxiously through that haunted house, clutching a candle and an axe, getting nowhere.

Deadened with grief four years after the death of his wife, Arthur is dispatched to a remote English village to sort out a deceased woman's estate. There, in his own melancholy, the lawyer barely notices how fear has warped the secretive residents of the village, all of whom know and none of whom will tell an outsider what ails them. (Ciarán Hinds and "Albert Nobbs" Oscar nominee Janet McTeer have fun playing the village's wealthiest residents, the only two who provide hospitality.)

Arthur does, at least, begin to wonder about the unusual death rate of village children. Oh, if ghosts could talk! Instead, this inconsolable spirit makes her feelings known through more ghoulish means.

For a certain target audience, of course, the chief selling point of "The Woman in Black" is the appearance of Radcliffe in his first adult, big-screen outing of the post-"Harry Potter" era. These Dan-ites can be assured that the handsome, self-possessed 22-year-old actor delivers nicely, conveying a lot in a performance that requires an excessive amount of silent tiptoeing.

The horror-loving audience who wants to be scared silly, on the other hand, ought to know that, TV ads featuring night-vision footage of freaked out preview patrons to the contrary, this is a movie of quiet spookiness rather than loud BOO!s. B-