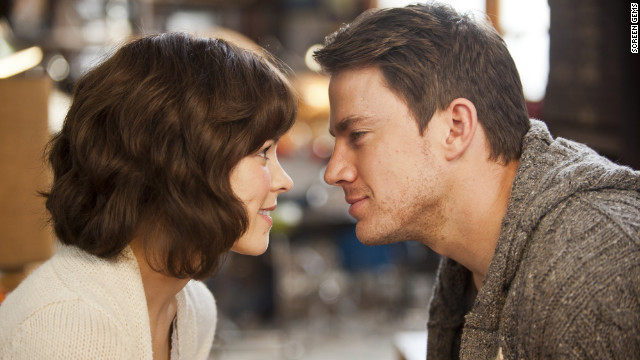 Rachel McAdams and Channing Tatum play a husband and wife who have to rediscover each other in "The Vow."

(CNN) -- A love story released in time for Valentine's Day, bringing together the stars of "The Notebook" (Rachel McAdams) and "Dear John" (Channing Tatum)?

Sounds like a cookie-cutter chick flick, for sure. But "The Vow" surpasses low expectations, for this male film critic at any rate, if only because it hits on an intriguing yarn and plays it out with some respect for the characters involved.

Tatum is Leo, a young man whose blissfully happy marriage is rear-ended by a snowplow -- propelling wife Paige (McAdams) through the windscreen and into a brain trauma unit. When she wakes up, she's okay -- except that she's wiped out the last five years entirely. She doesn't know Leo, doesn't remember dropping out of law school and switching to art classes, and doesn't like anything she finds in her wardrobe. She also doesn't remember cutting off her parents and her sister -- Leo's never even met them before -- or why she broke up with her fiancé, Jeremy.

Amnesia often figures as a handy crutch for thriller writers who love teasing out doubt and deception, but Michael Sucsy's movie is a different beast, a romance first and foremost, but a romance that claims to be inspired by a true story.

Sucsy (who directed Drew Barrymore and Jessica Lange in "Grey Gardens") plays down the condition's inherent paranoia, in part by drawing us in through the eyes of the husband, Leo.

Here's a guy who loves his wife, but who finds himself alone in the marriage because everything they shared as a couple has been erased. For Paige, home is the house she grew up in and the parents she remembers -- wealthy, privileged suburbanites who are only too keen to set back the clock and pretend their little girl never strayed across the tracks.

An actor who finds "perplexed and concerned" well within his limited range, Channing Tatum is a good fit for the bruised and brooding Leo, and the lively Rachel McAdams has some nice moments as the (blank?) Paige -- but flashbacks to happier days try too hard to force a chemistry that remains more theoretical than felt.

Still, the scenario (Sucsy is one of five credited writers) throws up some arresting questions about the nature of love. How can Leo still be in love with this woman who is a stranger to herself? Can he make her fall back in love with him? Is it even fair to try? Because these ideas are also emotional dilemmas the movie works surprisingly well despite its shortcuts and shortcomings.

It certainly isn't subtle about its preference for the sympathetic Leo -- and by extension, the vegan, tattooed, artistic Paige who voted for Obama -- over her domineering father, played by Sam Neill, and the conservative values he represents -- even though the uptown scenes are generally better written and more convincingly played than what amounts to a sitcom notion of bohemian chic.

Of course it's more than a little convenient that Paige never stops to ask why she walked out on the life she was groomed for -- the story's second, hidden trauma. If she had, the whole construct falls apart. But let that go.

This is mostly a poignant and touching effort. Just as Leo woos his estranged wife with "Chocolate roulette" (not a game Rachel McAdams plays very often I'm betting), given the choice between hard edges and gooey centers, Sucsy invariably heads for the fudge: it's sweet and chewy and fun to share.