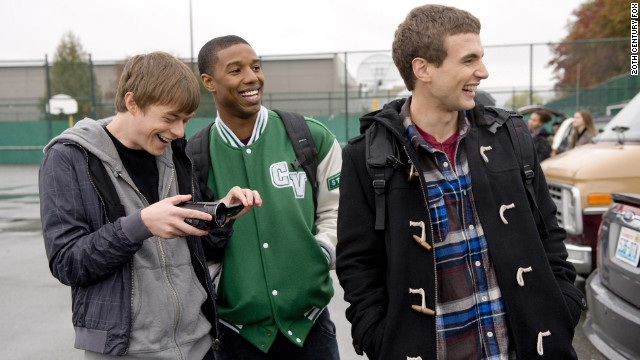 (Rolling Stone) -- Just when I was ready to scream if I had to sit through another found-footage chunk of FX out of the "Blair Witch"/"Paranormal Activity" playbook, along comes "Chronicle" to make me a believer.

Despite a gimmicky premise, "Chronicle" fuels its action with characters you can laugh with, understand and even take to heart. Major props to screenwriter Max Landis and director Josh Trank for this mesmerizing mind-bender.

"Chronicle" starts with high school senior Andrew (Dane DeHaan, looking like a young Leo DiCaprio) setting up a camera in his bedroom to catch his abusive father (Michael Kelly) punching him out while Andrew's mother lies dying downstairs.

Andrew, the shy loner, finds that chronicling his life with a camcorder is opening his world. That's especially true when Andrew, his cousin Matt (Alex Russell) and school icon Steve (Michael B. Jordan of "The Wire") discover a hole in the ground containing something alien. Whatever it is gifts them with powers that start slow with magic tricks, messing with girls and shifting cars in a parking lot.

DeHaan, Russell and Jordan excel in their roles, especially when the powers extend to flying and screwing with things dangerous and brutally destructive.

"Chronicle" is too thrilling (on a cheapie $15 million budget, yet) to ruin with spoilers. The ending is overkill, but the potent and provocative journey never stops springing surprises. You'll be hooked.