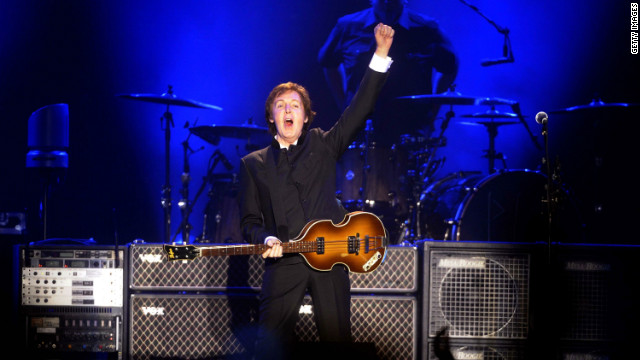 "I'm just kind of casually keeping an eye on how I feel, and onstage, it feels like it's always felt," Paul McCartney says.

(Rolling Stone) -- Twenty years ago, when Paul McCartney turned 50, he remembers his then-manager pushing the idea of retirement.

"It's only right," he was told. "You really don't want to go beyond 50, it's going to get embarrassing." In June, McCartney will be 70 ("I'm never going to believe I'm 70, I don't care what you say," he says. "There's a little cell in my brain that's never going to believe that"), and he still has no plans to stop touring or recording.

"You get the argument 'Make way for the young kids,' " he says. "And you think, 'F*** that, let them make way for themselves. If they're better than me, they'll beat me.' Foo Fighters don't have a problem, they're good. They'll do their thing.

"If you're enjoying it, why do something else? And what would you do? Well, a good answer is 'Take more holidays,' which is definitely on the cards, but I don't seem to do that. I love what I do so much that I don't really want to stop. I'm just kind of casually keeping an eye on how I feel, and onstage, it feels like it's always felt. So for the time being, the band's hot, I'm really enjoying myself, still singing like I sang, not experiencing, touch wood, any sort of problems to speak of. If it ain't broke, don't fix it."

It doesn't hurt that his touring schedule has been reduced to shorter, intense bursts in recent years, largely because of his shared-custody arrangement for his 8-year-old, Beatrice.

"We don't do the big sloggo tour, we don't do the big U2-Stones go-out-forever thing, and get a bit fed up with it," says McCartney, who's planning some dates for later this year. "What we do now is events and selective dates. Because of my custody situation, I can only do that. At first, we thought, 'Oh, God, is this going to be a problem?' and it's actually turned out to be some kind of a blessing."

He can see himself rocking well into his eighties.

"I can imagine it," he says. "As to whether my imagination will come true, I don't know. The last couple of years, I've gotten into guitar -- so there's all sorts of little things that crop up that entice you forward, and you go, 'Hmm, I'd like that.'"

I broach the idea of actually dying onstage -- would he be into it? He recoils slightly, then smiles.

"What kind of question is that? I must say, that's not in my imagination. Rocking on until a grand old age... the only thing would be when it's not pleasant anymore, then it would be 'That's a good time to stop.' But it's way too pleasant at the moment. And it pays. Good gig, man. But I know exactly where you're coming from, though. How long can this go on...?"

To read the rest of this cover story, pick up the March issue of Rolling Stone February 17.