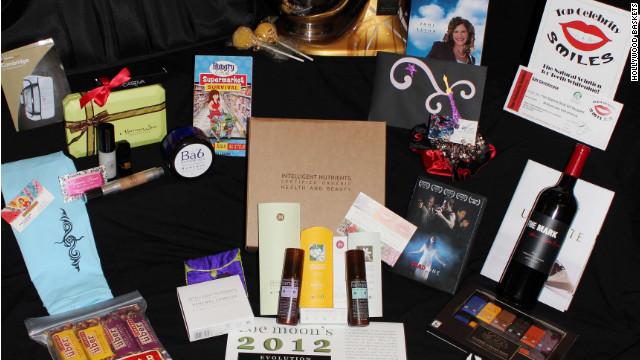 Top Oscar nominees and presenters get a customized kitchen mixer and 20 other items in a gift bag.

Los Angeles (CNN) -- Many are nominated, but only a few carry home hardware during Hollywood's awards season. For the rest, the gift bags and beauty suites in the days leading up to the Oscars promise the biggest rewards.

A-list Academy Award nominees get thousands of dollars in gifts from companies hoping to associate their products with their celebrity, while D-listers get bags of swag valued in the hundreds of dollars.

"It's something they anticipate from year to year," said Lisa Gal of Hollywood Baskets, who puts together a high-end gift bag that goes to 30 Oscar nominees and presenters who stay at the Four Seasons Hotel in Beverly Hills. The Academy Awards are Sunday night.

Stars checking into the Four Seasons will find a KitchenAid mixer set up in their room, customized with 22K gold paint and Swarovski crystal by Nicole Dinardo and valued at $1,500, Gal said.

Oscars roll out the red carpet

Friendly competition for the Oscars

A Traveler's Choice luggage bag sits nearby, filled with 20 other gifts valued at $7,000, ranging from a $25 pack of Sunny Sleevz -- to protect their arms at the beach -- to $500 worth of Intelligent Nutrients, a line of certified organic beauty products.

Some products come from established companies -- such as the high-end Norman Love chocolates -- while younger, smaller ones get into Gal's bag -- including Symone Prince Beauty.

"They can be in there with the big guys," Gal said. The key to being selected for the bag is quality, she said.

"We have to make sure this is up to par on the celebrity's level, so it's very exclusive," she said.

Getting in the Oscar bag can be a big boost for a product, said Asha Blake, whose Goldenheart Media partners with Gal.

"It's great exposure for the companies in media press releases, not just about being in front of celebrities," Blake said. "It's a different way of doing advertising in this day and age."

Gal can't reveal which stars get her bags until they check out of the hotel Monday, but her SAG Award and Golden Globe gift list included Glenn Close, Colin Firth, Michelle Williams, Morgan Freeman and Ryan Seacrest.

"Only the most recognizable, important people staying at the hotel" get her gift bag, but sometimes there are more big stars than bags. Gal scrambled to put together an extra bag one year when "Avatar" director James Cameron was left out.

One gift bag is set aside for donation to a charity, which can then auction it off, Gal said.

Publicist Roger Neal pioneered the practice of connecting the gifting with charities with his beauty and couture suite at the L'Ermitage Hotel before the Oscars 16 years ago.

"Just to give celebs free stuff is meaningless, but when there's a purpose with it, then I feel good about gifting them," Neal said.

The 200 celebrities, including 10 Oscar nominees, who attended his four-day suite event this week autographed items that will help an organ transplant foundation and a foster children's charity.

Two teens who live in foster homes were pampered with facials, massages and other beauty treatments, Neal said. They also left with suits, he said.

Richard Middleton, executive producer of "The Artist," brought his wife with him Tuesday, Neal said. She was given a Shekhar Rahate designed gown to wear on the red carpet. Seamstresses worked overnight to resize it for her, he said.

Eimear O'Kane, whose "Pentecost" is nominated for best live action short film, was gifted a handbag and jewels by designer Timmy Woods of Beverly Hills to carry on the red carpet Sunday.

Kari Feinstein's Oscar Style Lounge in West Hollywood's Mondrian Hotel offers something for everyone, with companies handing out gifts "based on the caliber of celebrities," Feinstein said.

Best supporting actress nominee Octavia Spencer would likely be offered a $1,000 piece of jewelry from Devora Libin Jewels and a week at the Capella Hotel in Cabo San Lucas, Mexico.

But some reality TV stars who show up may have to settle for a years supply of popcorn from Popcorn Indiana.

"We try and make sure that everyone that comes is someone who is recognizable with a lead part in a movie or TV show," Feinstein said.

But this year's D-lister could be next year's A-lister.