Madonna performs during the halftime show of Super Bowl XLVI at Lucas Oil Stadium in Indianapolis on Sunday, February 5. 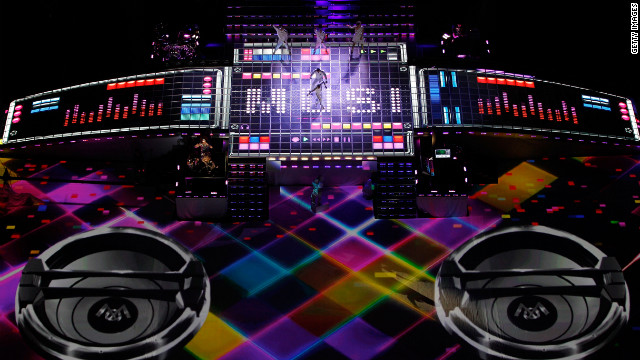 Madonna's set Sunday night included "Vogue," "Music," "Like a Prayer" and "Give Me All Your Luvin." 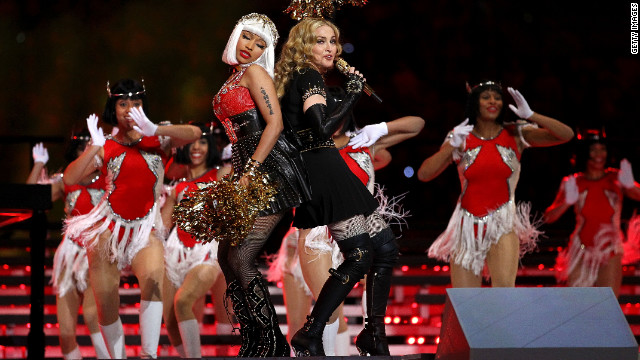 Nicki Minaj and M.I.A. (not pictured) join Madonna on stage dressed as cheerleaders. The pair are featured on "Give Me All Your Luvin," the first single on Madonna's forthcoming "M.D.N.A." It's due out in March. 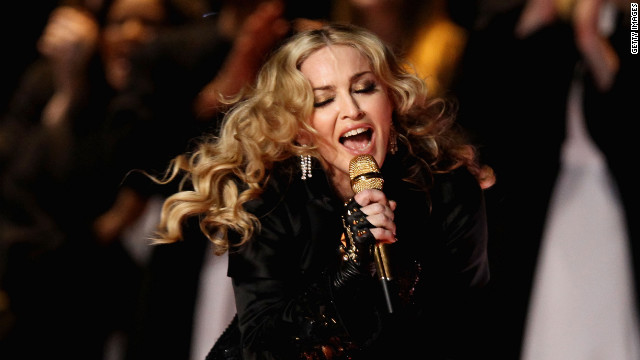 The NFL calls the show "the most-watched musical event of the year." An estimated 111 million U.S. viewers were expected to tune into the Super Bowl on Sunday. 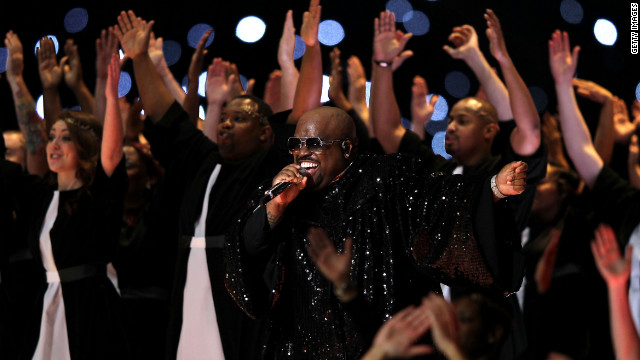 Signer Cee Lo Green performs on stage in a glittery choir robe. Earlier in the show he donned a marching band uniform. 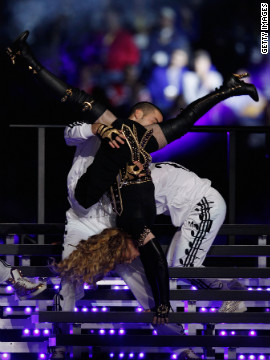 Madonna, 53, erupted onto the scene in the early '80s and is ranked by the Guinness World Records as the top-selling female recording artist of all time. 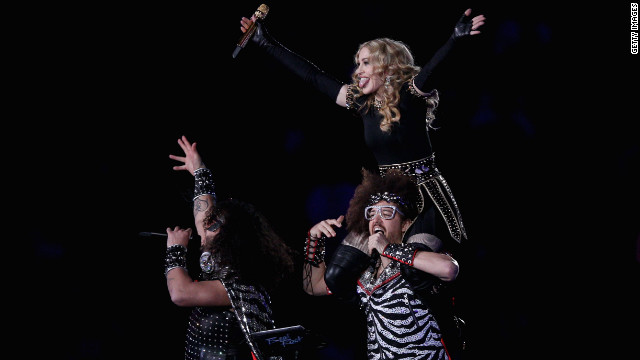 Madonna performs with Redfoo and Sky Blu of LMFAO, the twosome behind the chart-topping single "Sexy and I Know It." 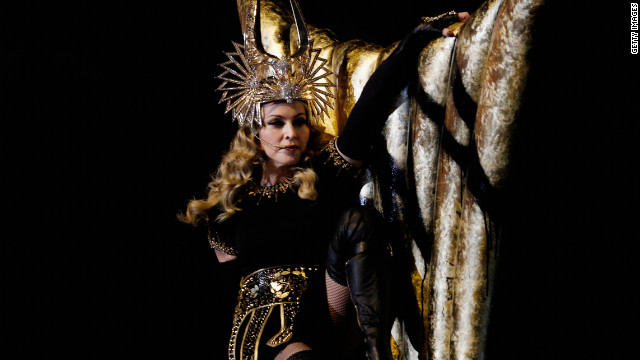 Madonna's started her performance dressed as a Roman goddess clad in black and gold. 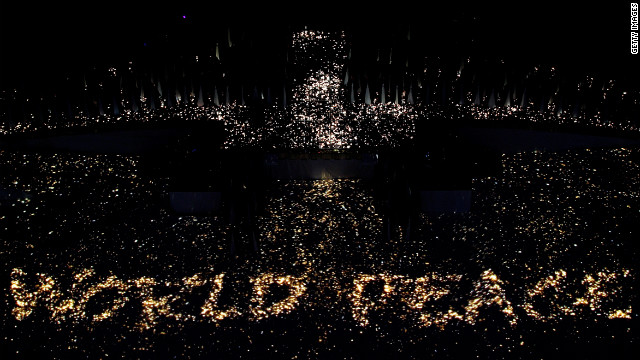 The show ended with the words "World Peace" projected onto the field.

(CNN) -- Ahead of her Super Bowl halftime show, singer Madonna promised there would be no "wardrobe malfunction." What she didn't guarantee was no obscene gestures.

Rapper M.I.A. provided a middle finger salute to network cameras Sunday night during the 12-minute extravaganza, when she joined Madonna during a performance of the latter's new single, "Give Me All Your Luvin'."

The apologies from the NFL and the broadcaster, NBC, came quickly -- they blamed each other.

"There was a failure in NBC's delay system," said Brian McCarty, the league's vice president of communications. "The obscene gesture in the performance was completely inappropriate, very disappointing, and we apologize to our fans." 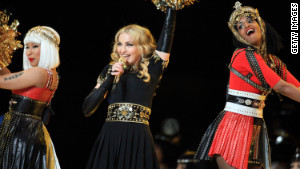 "The NFL hired the talent and produced the halftime show," NBC said. "Our system was late to obscure the inappropriate gesture and we apologize to our viewers."

The episode was reminiscent of the 2004 Super Bowl when singer Janet Jackson's nipple was briefly exposed during a performance with singer Justin Timberlake.

The infamous "wardrobe malfunction" episode, as it came to be known, prompted the Federal Communications Commission to fine broadcaster CBS $550,000. In November, a divided 3rd Circuit Court of Appeals ruled the FCC improperly punished the network.

Since then, the NFL has maintained tight control over the show's production.

After the Jackson-Timberlake showstopper, the halftime show largely relied on classic rock artists such as Paul McCartney, Bruce Springsteen, The Rolling Stones, The Who and Tom Petty.

Fast forward to Sunday when the New England Patriots were again playing in the big game, just as in 2004.

M.I.A, along with Nicki Minaj, Cee-Lo Green and LMFAO, joined Madonna as she treated fans to a greatest hits medley that included "Vogue," "Music" and "Like a Prayer."

The "spontaneous gesture," as NBC called it, came during a performance of Madonna's latest single. M.I.A not only flipped her middle finger but uttered "I don't give a sh*t."

Madonna did not issue a comment. But on Twitter, where the halftime show generated 8,000 tweets per second, the reaction was swift and mixed.

"What was that singer M.I.A. thinking?! Flipping off America during halftime can't be a good career move," Will Ripley of Denver tweeted.

But Devon Soltendieck of Montreal was less concerned.

"Can we all stop pretending #MIA flipping the Finger during the halftime show is offensive in 2012?" he asked.

Said Josh Jackson, editor in chief of the music magazine Paste: "M.I.A. Didn't flip us all off. She just had a middle finger malfunction."