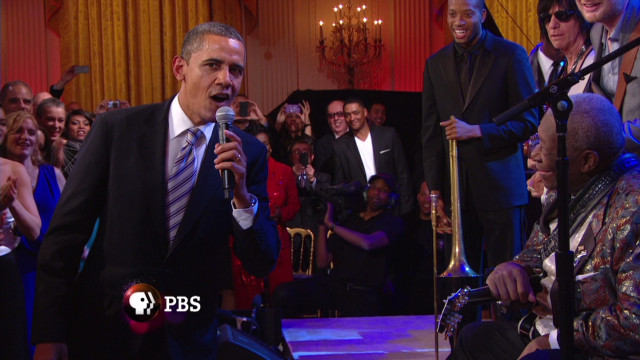 Washington (CNN) -- President Barack Obama complained Tuesday that he doesn't get out much. Then he noted he doesn't have to when B.B. King and Mick Jagger come to play a concert at his house.

The blues and rock legends were at the White House for a PBS performance series in the East Room honoring the history of blues music. A lineup of top blues performers past and present offered a selection of standards that displayed all the raw elements of a distinctly American musical genre originating from the days of slavery.

Obama even got in the act. When goaded by blues giant Buddy Guy, he sang a verse of the rollicking finale "Sweet Home Chicago."

Earlier, Obama described the genre as a form of oral history that bore witness to the struggles of African-Americans.

"The blues reminds us that we've been through tougher times before," Obama said. "That's why I'm proud to have these artists here not just as a fan but also as the president because their music teaches us that when we find ourselves at a crossroads, we don't shy away from our problems. We own them. We face up to them. We deal with them. We sing about them. We turn them into art. And even as we face the challenges of today we imagine a brighter tomorrow."

Blues music, Obama said, "speaks to something universal," because "no one goes through life without joy and pain, triumph and sorrow," and the blues encompasses all of that "sometimes with just one lyric or just one note."

Renowned rockers Warren Haynes and Derek Trucks of the Allman Brothers Band also took part, along with Susan Tedeschi, a blues guitarist and singer who is married to Trucks and forms a Grammy-winning band with him.

Most of the assembled performers took the stage for an opening rendition of "Let the Good Times Roll," after which the 86-year-old King -- playing ringmaster from his seat at center stage -- offered his encouragement for the president's re-election bid.

"Mr. President, I've been praying for you for three years, and I want you to keep your job," King said to applause.

The event was emceed for PBS by actress and singer Taraji Henson, who commented on the somewhat surreal juxtaposition of the evening's lineup and setting.

"I never dreamt in a million years that I would ever say these next five words, and certainly never thought that I'd be saying them right here at the White House, but, ladies and gentlemen, Mick Jagger," Henson said in introducing the original Rolling Stone.

In appropriate rock star fashion, Jagger ran onstage to dance and sing "I Can't Turn You Loose" backed by the "house" band led by Booker T. Jones. Before his second number -- a cover of the Howlin' Wolf song "Commit a Crime" performed with fellow Brit Beck -- Jagger talked about his introduction to the blues as a young man in England with the music of Sonny Boy Williamson.

Recounting how Williamson visited London and even dressed the part in bowler hat with umbrella in hand, Jagger added: "He said those English boys, they want to play the blues real bad, and they do -- real bad."

Copeland and Tedeschi then joined Jagger to provide background vocals on his Rolling Stones hit "Miss You."

In a tribute to the roots of the blues, Copeland and Clark performed a moving version of "Beat Up Guitar," and Clark followed with "Catfish Blues" and Mo' did a solo version of "Henry."

Tedeschi, Trucks and Haynes played a tribute to Etta James with a powerful rendition of her classic "I'd Rather Go Blind," and Jagger returned to join Guy, Beck and Clark for blues standard "Five Long Years," originally written and recorded by Eddie Boyd.

The finale brought the entire ensemble on stage one more time to serenade the president and first lady with the tribute to their hometown, with Obama welcoming them as the "White House Blues All Stars."

The roughly 200 guests, including Cabinet members Kathleen Sebelius, John Bryson and Jacob Lew, stood and clapped at Obama's prompting, then shrieked when the president took the microphone after Guy called him out about his recent impersonation of singer Al Green.

"I heard you singing Al Green," Guy said, waving for Obama to indulge him. "You started something. You got to keep it up."

Obama did, a bit hesitant at first and then gaining gusto, offering the microphone to King at one point to help him finish the verse.

While Obama's voice may have lacked the power of the other performers, it was a presidential musical performance unseen since Bill Clinton on the saxophone.