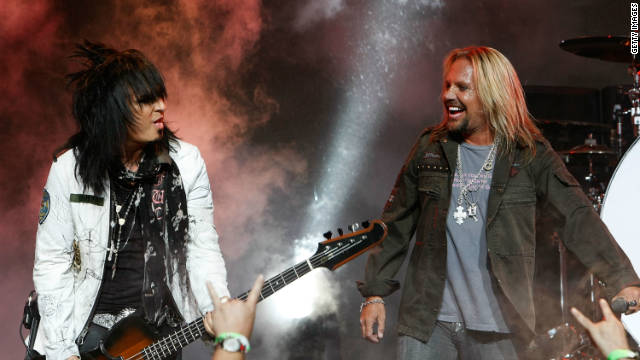 (Rolling Stone) -- When Mötley Crüe announced late last year they'd be taking up temporary residency in Las Vegas at the Hard Rock Hotel's Joint, it was one of those ideas that seemed so perfect the only question was, "What took so long?"

This was, after all, a band whose celebration of the rock & roll lifestyle has been immoralized in a book and may still make it to film. So, what better place to lay down roots -- even for just a few weeks -- than in a town nicknamed Sin City?

As they hyped the residency, Crüe promised not just the usual exploits but to take the pyro and girls, girls, girls to new levels of excess. When it kicked off this past weekend, the debauchery was no greater than usual -- women on stage several times throughout the show, aerialists and lots of confetti and pyro, but no more craziness than a typical Crüe show. After Saturday's show, drummer Tommy Lee told Rolling Stone the band is still working out the logistics.

"We're doing production s**t right up until doors open, f****** crazy," Lee said. "But it's getting better. It's gonna be sick in another show or two."

The band has decided to push their creativity and musicality. There were, of course, many of the expected hits, from "Live Wire," "Wild Side" and "Shout at the Devil" to "Kickstart My Heart," "Dr. Feelgood" and the closing "Home Sweet Home," which began with Lee on a piano that descended from the ceiling. Frontman Vince Neil had his own Peter Pan moment, sailing over the crowd during the song.

But there were also unexpected moments, including a brief acoustic set in the middle of the show that found them all huddled together in a similar manner to U2's stripped-down concert interludes. For the Saturday night performance, the Crüe turned three songs, starting with "On With the Show" and wrapping with "Don't Go Away Mad (Just Go Away)," into acoustic numbers.

"Doing the acoustic thing for us is something we've been wanting to do forever," Lee said.

Another new aspect of the performance was the inclusion of a narrator, Genocide, who worked his way through the crowd and stage, introducing the band members and providing occasional levity between songs. It's another new feature Lee was excited about.

"Being able to work the room with Genocide, our MC, we've never done anything like that in an arena, having people pop up here and there," Lee said.

The quartet is using the stay at the Joint to live out some performance fantasies. "We're able to place things strategically in the best place in the room, which we wouldn't really be able to do in arenas," Lee says. "Being in one place for a while, we're able to really figure out how to use this building. It's been fun, interesting."

The Joint shows run through February 19, but Lee hopes the band can take lessons from the residency with them on the road. "Now we kind of know what we're getting into here. Hopefully this'll set up something else in a bigger venue, a different place," he says. "You just never know."