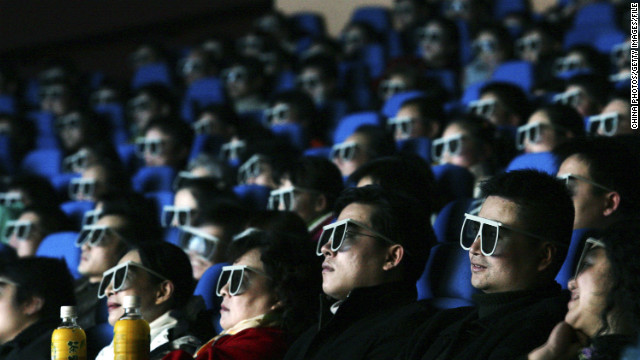 Under the new U.S.-China deal, more IMAX or 3D films are being allowed into China.

Hong Kong (CNN) -- In a boon for IMAX and movie-watchers in China alike, a deal struck between the United States and China last week raises the number of 3D, IMAX and similar enhanced-format movies released in China.

China has remained mostly closed to Hollywood, with a quota of 20 foreign films per year, most of them being from the United States. Under the agreement, announced during U.S. Vice President Joe Biden's trip to Los Angeles with his Chinese counterpart Xi Jinping, 14 additional IMAX or 3D films would be allowed. Foreign film companies will also be permitted to take a 25% cut of the box office, nearly double the current 13%-17%.

In a White House statement, Biden said the deal would support "thousands of American jobs in and around the film industry," adding that "Chinese audiences will have access to more of the finest films made anywhere in the world." Some 2.2 million Americans have jobs that depend on the film and television industries, according to the Motion Picture Association of America.

IMAX, which has 217 theatres open or contracted to open in China, hailed the move, saying in a statement Saturday that it was "also committed to bringing Chinese films presented in our format to the U.S."

On February 14, the company said that its first quarter box office of the year was $55 million, up from $38 million during the same period last year, driven primarily by "Mission: Impossible -- Ghost Protocol," which accounted for nearly half those earnings. The Chinese film, "Flying Swords of Dragon Gate," rounded the top four with $3.7 million.

The deal resolves film-related issues related to a 2009 World Trade Organization ruling siding with the United States. According to the ruling, China's measures relating to the importation and distribution of films, sound recordings, audiovisual home entertainment products and reading materials breached its trading rights commitments as a WTO member.

I think it will increase more opportunities for Chinese and U.S. film (companies) to cooperate together to produce more films
Allen Wan, Salon Films Group

Hollywood has been battling piracy in China, despite Beijing's closure of piracy websites, in no small part due to the limited access of U.S. films to Chinese screens.

Allen Wan, head of production for Hong Kong-based Salon Films Group which has worked with Hollywood companies in Asia, was positive about the deal. "Chinese audiences can see more films from the U.S. properly, officially. And on the other hand, I think it will increase more opportunities for Chinese and U.S. film (companies) to cooperate together to produce more films."

"The Flowers of War," directed by Chinese director Zhang Yimou and starring Oscar-winner Christian Bale, cost $100 million to make, the largest production made in China. The film, which is set during Japan's occupation of Nanjing and the 1937 massacre, was China's submission for the Academy Award for Best Foreign Language Film. Its executive producer is David Linde, CEO of Lava Bear Films and former chairman of Universal Pictures. (He was also executive producer for Ang Lee's "Crouching Tiger, Hidden Dragon.")

The movie has failed to connect with U.S. audiences, however. For the week of February 14, it was playing in six locations, down from 30 when it opened, with an average gross of $550 per location, according to Boxoffice.com. The film's overall U.S. gross during its four-week run? $213,792, at last count.

The venture will have an initial capitalization of $330 million.

The Chinese companies will hold a 55% majority stake; DreamWorks Animation will hold about 45%, according to the announcement. On the agenda: "Kung Fu Panda 3," Chinese state-run news agency Xinhua cited CMC chief investment officer Li Huaiyu as saying in an exclusive interview.

DreamWorks Animation's "Kung Fu Panda" was the top animated film released in China in 2008, according to the company. The sequel, which made $95 million at the Chinese box office last year, was second only to "Transformers 3," which brought in $170 million.