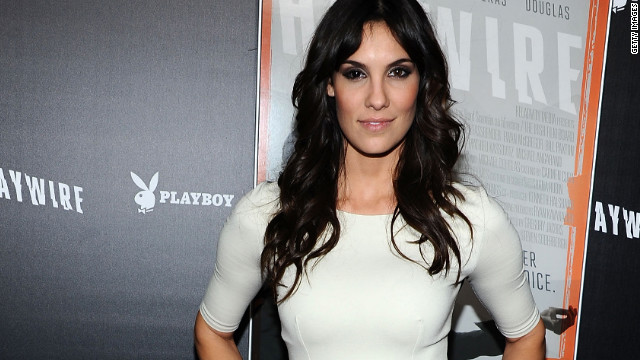 (CNN) -- For the past two seasons, Daniela Ruah has played junior field agent Kensi Blye on "NCIS: Los Angeles." But the vivacious olive-skinned actress first became famous in another country: her parents' homeland of Portugal. She even won the Iberian version of "Dancing with the Stars."

Ruah is descended from a family of doctors. Her father is the former resident chief of otolaryngology (which is a fancy word for an eye, ear and throat doctor) at Boston University Hospital and her 92-year-old grandfather still practices medicine. The family moved back to their homeland when Ruah was 5.

Fluent in Portuguese, Spanish and English, Ruah moved to London at 18 to attend university and eventually made her way to New York to study at the Lee Strasberg Institute.

In her little time off, Ruah loves spending time with her dog and decorating her recently purchased home. She recently spoke with CNN about her show, her heritage and the advice she gets from a famous co-star.

CNN: Your character has a big story arc this week.

Daniela Ruah: We knew from season one that her father died when she was a teenager and this is the unveiling of what happened. She grew up never believing he had died accidentally. She's always believed foul play and she's been pursuing this her entire life.

She gets asked, "What are you going to do when you find the guy you think did this to your dad? Are you going to shoot him?" And she says, "Well, what if I do?" It's a big dilemma between killing for vengeance and going the right way and dealing with things legally. There's a lot of turmoil going on inside her and it affects the team.

CNN: The show is really popular and yet it gets no buzz. Do you ever feel like the redheaded stepchild?

CNN: But you know what I mean.

Ruah: I think when it comes to buzz, and I'm just saying this on a very general note and from what I see, it could be completely wrong, but from what I see, buzz tends to come from younger generations, people who buy the products, people who go on the Internet, people who go on blogs. The generation that watches our show seems to be a little bit of an older one and I think that might be the reason. I know a lot of procedurals have huge viewership yet they're never nominated for awards. You never really see, as you say, a lot of buzz around them.

Ruah: (Laughs) - Whatever floats their boat. It's funny, we have been nominated for a few teen choice awards and I think slowly the writers have managed to create a different appeal for a younger generation with the type of story lines, with the banter we have.

CNN: Your character was introduced on the original "NCIS." Did you learn anything from the cast?

Ruah: Mark Harmon was super sweet. He told me when you have to look at a screen, make sure your eyes are moving around. It makes it look like you're looking harder. Cote de Pablo (Ziva David), the fact that I realized she was in an out of hair and makeup in all of 20 minutes made me go, "That's what I'm going to do. I refuse to be called in at 5 a.m. to get hair and makeup. I'm an agent; let's keep it simple, a ponytail." The way they work and support each other. I really like those guys, I really do.

CNN: Your family is Portuguese and Jewish, which is pretty unusual. How many Jews are there, like five?

Ruah: Yes and they're all my family! There's I'd say between four- and five-hundred. Not a lot out of 10½ million to 11 million people. My family is probably the biggest family there. But coming from a small community makes you want to follow the traditions of your family much more.

CNN: Your dad is a major pooh-bah doctor. Was he disappointed that you wanted to become an actress?

Ruah: I remember asking my father if he had preferred that I'd gone into medicine and his exact words were, "Are you crazy? You have no idea what this lifestyle is like. It's a dog style life, being on call, sleeping at the hospital, studying for the rest of your life because of medical developments, it's research, it's surgery, it's such a long time to educate yourself in the field." I do have a huge fascination for science and I love to hear what my dad has to say. He used to take me into minor surgeries when I was a kid and let me watch, so I definitely have a passion for it, but it's not as big a passion as I have for acting and creating characters. From the moment I told them this is what I want to do, they were supportive.

CNN: You were on the Portuguese version of "Dancing with the Stars."

Ruah: I did. I won. I got a trophy, but it's not metallic, I think its crystal. It's in my place in Portugal.

CNN: Would you do the U.S. version?

Ruah: I think there are phases in your life that make sense and I don't see being on "Dancing with the Stars" at this point in my life and career. That was that phase. I had a ton of fun, I don't regret it, but I think I'm past that now. I'm onto other things.

CNN: What do you do in your time off?

Ruah: On my very little time off? I just moved, so a lot of my time is dedicated to buying new furniture. It's the first house I've ever lived in. I've always lived in apartments and condos, so it's a big change for me.

CNN: Do you go online a lot looking at sofas?

Ruah: I do go online a lot. I was given some advice by [co-star and "Scent of a Woman" actor] Chris O'Donnell. He was like, "Be careful, you're going to start buying items that you love and then you'll put them all together and realize nothing goes together," so what I did was buy a couple of pieces that I love and now I'm going to get a decorator to help me tie everything together.

CNN: Now when your friends come over are you like, "Guys get your feet off the couch?"

Ruah: No, I have a dog so I don't want to come home and take my shoes off [or] otherwise I'll ruin the mint white carpet on the floor. I'd rather have a house that's nice but usable. Plus my friends aren't barbarians. They don't generally put their feet on my couch!