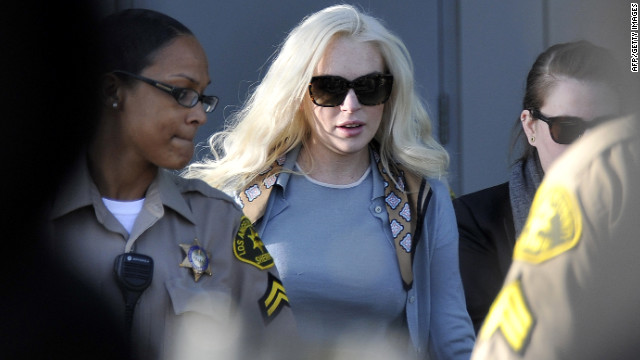 Los Angeles (CNN) -- Lindsay Lohan's career, interrupted by frequent trips to court, jail and rehab, may be entering a brighter phase as the actress hosts "Saturday Night Live" and her probation restrictions end next month.

"SNL! I love @NBC !!!!!!!!!!!!!" Lohan tweeted after the NBC show revealed in an on-air promo and Twitter posting that she would host its March 3 episode.

The sales success of her nude photo spread in Playboy magazine, which hit news stands in December, is evidence that Lohan's star power survived her legal troubles.

Lohan was reportedly paid nearly $1 million to pose for the photos taken in a style reminiscent of the nude photograph of Marilyn Monroe that graced the debut issue of Playboy in 1953.

Lohan's probation began in 2007 after two drunk driving convictions, but was extended after a several of probation violations, including missed counseling sessions, failed drug and alcohol tests and a shoplifting conviction.

Stints in jail and court-ordered rehab cost Lohan acting jobs, but the light at the end of the strict probation tunnel appears in sight for Lohan.

Lohan, 25, sipped on sparkling water on a recent evening as she predicted she would finish her community service and counseling requirements well ahead of the March 29 deadline set by the judge overseeing her case.

"I've done all my days," Lohan said, referring to the shifts she must work at the Los Angeles County morgue each month. If so, next Wednesday's monthly appearance before Judge Stephanie Sautner should be as short and positive as the past two months.

"Just keep doing what you're doing," Judge Sautner said in January. "You appear to be doing it well."

Lohan's supervised probation ends when she completes the last 480 of community service ordered last year when she pleaded guilty to stealing a necklace from a Venice, California, jewelry store. The judge extended her drunk driving probation, as well.

The actress, in a recent conversation with CNN, was confident she would complete the work at the morgue before the deadline at the end of next month.

Lohan stumbled in November when she was found in violation of her probation. She admitted that she failed to comply with Sautner's earlier order that she work at a women's shelter. Her punishment -- a 30-day jail sentence -- translated into just a few hours behind bars because of measures to reduce overcrowding in Los Angeles County jails.

But her probation report in each monthly court appearance since then has been positive, raising fan hopes that the actress will soon be back on track with her career.