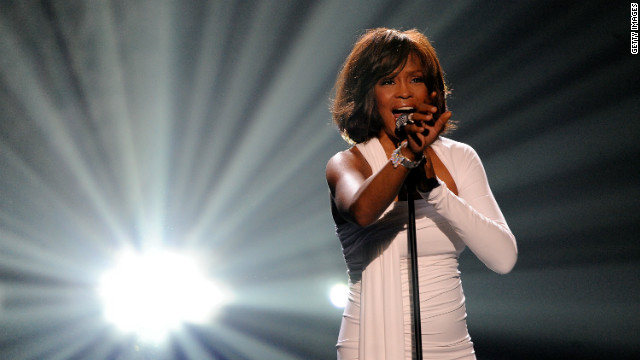 For coverage of Whitney Houston's death, tune in to CNN and HLN. At 11 a.m. ET Saturday, CNN's Piers Morgan, Soledad O'Brien and Don Lemon bring you live funeral coverage on "Whitney Houston: Her Life, Her Music."

(CNN) -- Whitney Houston, who ruled the pop charts during the 1980s and '90s, will be laid to rest Saturday following a funeral at her childhood church in Newark, New Jersey.

Photos: Houston through the years

A look back at key moments in Houston's life as well as her last days:

Houston is born in Newark to gospel singer Cissy Houston. Her cousins include Dee Dee and Dionne Warwick; Houston's godmother was "Queen of Soul" Aretha Franklin. She honed her vocal skills as a child at New Hope Baptist Church, where her mother was director of sacred music.

"Whitney's mother and cousins nurtured her passion for gospel music since birth," according to a biography on Houston's website. "As a teenager, Whitney was already singing on the scene in New York."

Houston: Motherhood trained me for film

Also while in her teens, Houston sang backup for Chaka Khan on "I'm Every Woman," a song Houston would re-record in 1992 that went on to become one of her biggest hits.

Arista Records' Clive Davis is taken to a New York nightclub where Houston was performing, and signs her on the spot.

Houston's debut album, "Whitney Houston" is released. It yields three consecutive No. 1 singles, "Saving All My Love For You," "How Will I Know" and "The Greatest Love of All." The album sold more than 12 million copies in the United States and more abroad, according to Houston's website, and set the record as the biggest-selling debut album by a solo artist.

Houston's second album, "Whitney," is released and entered the Billboard album charts at No. 1, according to Houston's website. The nine-times-platinum album contains four No. 1 singles and establishes Houston and the only artist ever to have seven consecutive No. 1 hits.

Prescriptions looked at in Houston death

Houston appears with Kevin Costner in "The Bodyguard." The film's soundtrack, featuring Houston's smash hit -- a remake of the Dolly Parton single "I Will Always Love You" -- went 17-times platinum, making it the biggest-selling motion picture soundtrack album in history. "I Will Always Love You" becomes the biggest-selling commercial single in history.

Houston releases "My Love Is Your Love," which earns her a Grammy but does not match the performance of her previous albums, according to Biography.com.

Reports about Houston's struggles with drug addiction, health problems and her rocky marriage with Brown begin to surface. Album sales drop off, and her voice begins to show signs of wear.

In a now-infamous interview with ABC's Diane Sawyer, Houston admitted to using drugs but denied using crack. "Crack is wack," she said, quoting a line from a mural painted in 1986. In the same interview, Houston told Sawyer, "The biggest devil is me. I'm either my best friend or my worst enemy."

Filming begins on the short-lived reality show "Being Bobby Brown," featuring Brown and Houston, which aired in 2005. "The show aired during the worst years of the couple's crumbling marriage; drug use, lifestyle excess and bad behavior were all caught on tape, and Houston's reputation sunk to new lows," according to Biography.com. Houston later said she did the show to try to save her marriage.

At some point, Houston's mother, Cissy Houston, steps in. Houston told Oprah Winfrey in a 2009 interview that her mother arrived on her doorstep with sheriff's officers and a court order for drug intervention.

"She walks in with the sheriff and she says: 'I have a court injunction here. You do it my way or we're not going to do this at all,'" Houston recalled in the interview. "'You're going to go on TV, and you're going to retire. And say you're going to give this up because it's not worth it.'"

Houston releases "I Look To You," her first album in seven years.

Houston works to turn her career around, working on the movie "Sparkle," the remake of a 1976 film said to be loosely inspired by the Supremes. The movie is set for release this summer.

Houston visits Dr. Shawn Nasseri, a Beverly Hills ear, nose and throat specialist, according to a source familiar with her visit.

Houston is seen ordering and consuming considerable quantities of alcohol at the Beverly Hilton hotel before 10 a.m., according to a source briefed on her behavior and activity in the days before her death. Guests on both days overheard Houston complaining loudly about her drinks, accusing bartenders of "watering down" or "putting too much ice" in them, the source said. Guests express concern about Houston's erratic behavior, according to the source; her disheveled appearance, including mismatched clothing, suggested to them that she was intoxicated. She is also perspiring heavily. Houston is seen jumping in and out of the pool and doing somersaults in the pool area, the source said.

Houston attends a pre-Grammys party to celebrate singer Kelly Price's nominations. At one point, she joined Price on the stage and sang a hoarse rendition of "Jesus Loves Me." Price said Monday that Houston was not behaving erratically and "I didn't see someone who was high" although she said Houston did drink champagne. Photos of Houston leaving the party appeared to show her sweaty and somewhat disheveled, although Price attributed her "messy" appearance to partygoers' singing and dancing until the wee hours of Friday morning.

Houston is set to attend Clive Davis' pre-Grammys party at the Beverly Hilton. She is seen drinking at the hotel pool in the morning, according to the source briefed on her behavior and activity, but witnesses report she was not behaving erratically.

Police and fire officials are summoned to Houston's room after she is found unconscious in the room's bathtub.

Houston is pronounced dead at age 48 after efforts to revive her are unsuccessful.

An autopsy is performed on Houston's body. The Los Angeles County coroner's office has said a cause of death is undetermined pending the results of toxicology tests.

Houston's body is flown back to her native New Jersey for funeral services, set for Saturday at New Hope Baptist Church.

CNN's Don Lemon and Alan Duke contributed to this report.