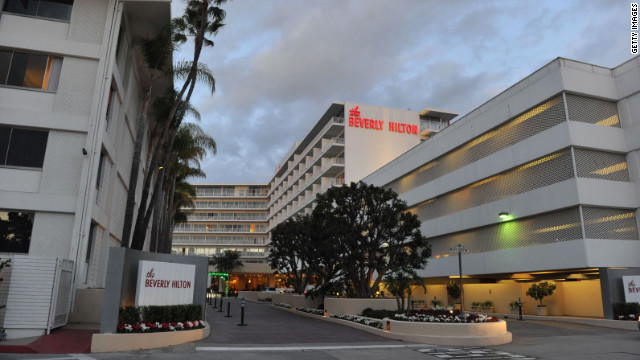 Whitney Houston was found dead in her room at the Beverly Hilton in California on Saturday, February 12.

Beverly Hills, California (CNN) -- Whether inside or outside the Beverly Hilton hotel where singer Whitney Houston died Saturday afternoon, the grief and shock were the same.

They were just expressed differently -- by the famous indoors and by the everyday fan outdoors.

Inside the hotel that occupies a full block, the music industry's biggest names gathered in elegant attire for an annual pre-Grammy party that had been long planned by Houston's mentor, Clive Davis.

But a party just didn't seem right, participants said as they walked down the red carpet.

Some, like songwriter David Foster, thought twice about attending a gala at the same hotel where 48-year-old Houston died in her room just hours earlier.

Church attended by Houston as a child

"It's just shocking," he said of the death.

Bennett then made a well-understood reference to Houston's past problems with drugs, and he called on "everyone to get our government to legalize drugs" so persons don't have to get it from "gangs" under the table, he said.

The country needs to "legalize drugs like they did in Amsterdam," Bennett added.

He then sang "How Do You Keep the Music Playing" and received a standing ovation with the last line: "Hope the music never ends."

Davis opened his remarks about the "unspeakably tragic news of our beloved Whitney's passing." Davis has long hosted a party the day before the Grammy Awards, the music industry's most celebrated event.

"I do have a heavy heart, and I am personally devastated by someone so close to me for so many years," Davis told the gathering of artists and entertainers.

"My heart goes out to her daughter Bobbi Kristina and her mother, Cissy," Davis said.

Houston's mentor then asked for a moment of silence, saying, "We dedicate this evening to her."

Outside, as a coastal chill settled over people who gathered until the small hours of Sunday morning, fans and media flocked to two places: the front and back entrances of the sprawling hotel complex. In between, they laid roses and flickering candles.

At the front entrance, a Beverly Hills police officer pushed back mourners and journalists from the entryway and said that they had to stand on the public sidewalk, pointing to the line dividing public space and private property.

Many of the 100 persons carried the flame of a candle. Singing accompanied the vigil, including such Houston standards as "The Greatest Love of All."

One singer, Pepper Mashay, who met Houston once about 10 years ago, started singing "My Love is Your Love" in memory of Houston. Mourners, as well as journalists, immediately started recording video of the sidewalk performance on their cameras or smart phones.

"Pain -- they're carrying a lot of pain," Mashay said about Houston's drug woes. "It could be relationships from the past. All we can say is that she's at peace now."

Then Mashay added, remembering that Houston has a teenaged daughter: "There's a teenager out here who's lost her mother."

But it was at the back of the hotel -- at the service entrance -- where the largest group of fans, mourners, media and paparazzi gathered. About 200 persons assembled on the ficus-tree-lined sidewalk.

Everyone was waiting for whether Houston's body was going to taken away by authorities through the service door. A police vehicle marked "Crime Lab" was parked at the door, also joined by a large truck marked "rental" -- which conveniently shielded off spectators from the best view of the entrance.

The rear door was also being used by artists such as Tony Bennett and Jennifer Hudson attending Davis' party. The entertainers apparently were seeking to avoid the public, but it hardly worked Saturday night.

At one point, a woman in the crowd shouted: "Alicia!" as singer Alicia Keys walked by.

The throng surged. Paparazzi and fans with cameras pushed the hardest to get to the front of the line, where the public sidewalk met the private driveway.

Keys entered the back of the hotel, and then the pack of spectators eased and resumed friendly conversation in the cool night air beside the seven-foot tall bushes.

Some fans wept, as they played Houston's music videos on their smartphones.

One fan, Tya Conerly, 31, just had to stop by the hotel, even tough she, her girlfriend and Conerly's daughter should have been making the two-hour drive back home to San Diego.

Conerly's daughter, Isreal, turned 11 years old on Saturday, and the group of three drove to Los Angeles to do some shopping and have a celebratory dinner for Isreal's birthday. It was also a celebration of Conerly's 31st birthday on Friday.

But when Conerly's girlfriend, Crystal James, 26, received a phone call from her father saying that Houston had died, none of the three could believe it.

Conerly thought it was another Twitter rumor of a celebrity's death, and she used her phone to check it out the information.

She found that Houston had indeed died -- at the Beverly Hilton.

The day become a birthday that Isreal will never forget, she said.

So the two women and girl visited the hotel -- and decided to join the crowd at the back door, wondering when the coroner or police would remove Houston's body.

"We just wanted to come by and show some support," Conerly said under a towering ficus tree by the rear driveway.

Then she referred to Houston's history of drug abuse.

"Everyone has their own demons, and some overcome them and some never do," Conerly stated. "Sometimes life gets the best of us."