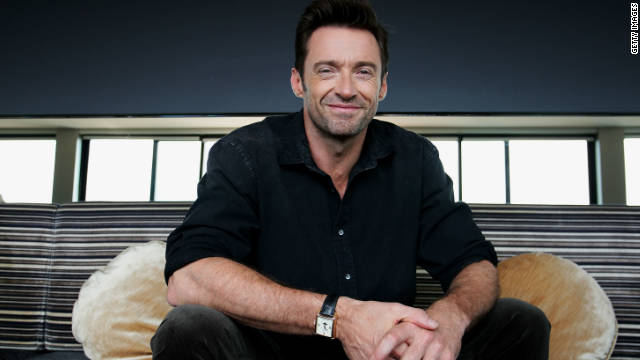 "I was mainly inspired by Paul Newman on the business level and what he did," Hugh Jackman said.

Initially, the business offered a variety of coffees and teas, sold online and in a small cafe in the Tribeca part of New York City. This week, Jackman's expanding his line of offerings into the world of chocolate, just in time for Valentine's Day.

While it's certainly commonplace for entertainment professionals to dive into other business opportunities, Jackman's new business may seem a bit curious if viewed through the lens of his offering items tied to the little pleasures and relaxations of life. Jackman seems to always be shooting a film or booking theater work. The guy can't slow down.

CNN recently spoke with the actor from London about the evolution of his new business, the inspiration behind it and who in his family is helping out. He's currently rehearsing for the upcoming film adaptation of "Les Misérables" and later this year will begin shooting "The Wolverine," reprising his role as Logan/Wolverine in the latest comic adaptation.

Jackman: Laughing Man worldwide is going to incubate different companies. One of them is coffee and tea, one of them is chocolate. Who knows where we'll go from there. Each of these companies that we create, 100% of the profits go to charities. It's first and foremost about creating good products that people really want. Not that they feel like they should want it, but because they genuinely want it. And then being able to create jobs and support entrepreneuralism.

I was mainly inspired by Paul Newman on the business level and what he did. I read his book about 10 years ago, "Shameless Exploitation in the Pursuit of the Common Good." It's a great book and that's probably where the idea incubated.

CNN: The Newman line, and sorry for the pun, started very organically.

Jackman: That's what inspired me, and I was waiting for the right opportunity. I was in Ethiopia as a part of World Vision and I met and worked with a coffee farmer, Dukale; at the time I was living with them, and it was pretty amazing. It had a great effect on me. So the urgency for me to do something was growing, but I didn't know what.

Now, we actually buy coffee from Dukale where I stayed. Our Espresso blend is actually called Dukale's Dream.

CNN: And everything is sourced with fair trade guidelines and all that?

Jackman: Absolutely. Organic, fairly traded, the chocolates are kosher, you name it. We wanted to be win-win all around. The environment, the growers and the purchasers.

CNN: There's a lot of political aspects surrounding food, not only in the U.S. but on a global level. But there's a market out there for people that care about that stuff.

Jackman: Oh, yeah, hugely. And what's important for us to know who we are buying from. There's some organizations that you're buying from that are like a co-op and you can't really guarantee who you are buying from. We really want to encourage people that you can get a really fair price for quality products, wherever it's grown. That's what we're doing.

Business done well is a win-win all around. It doesn't have to tax the environment or quality or the workers or people. There is a way, under the natural law, for this to work for everybody.

CNN: As an actor, you're constantly busy with work. How much are you involved in the day-to-day or month-to-month of this?

Jackman: Every weekend, I go down [to the store in New York City] with my son and do some work. He's 11. I figure it's good for him to start doing some work. Most of the business is done online. I'm involved as much as I can without it being my full-time job.

For a long time, I've been looking to focus my profile on and this somehow ... I've always been interested in economics and business -- my wife always jokes that I should be taking a briefcase to work -- it's something I genuinely enjoy and it doesn't feel like a burden.

CNN: You're rehearsing "Les Misérables" right now. What's the adaptation going to be like?

Jackman: It's a musical adaptation. Obviously, it's a 1,500 page book, but don't worry, it's not going to be 15 hours long. It's an epic, and we'll be musically close to the musical. Today, I was working on a brand new song that Claude-Michel [Schönberg] wrote with Alain Boublil, which was a great thrill for me.

CNN: What's the sound like? Is it modern in any way?

Jackman: Oh, no, the music is largely as it is from the musical. So there's no rap version or blues version. It's going to be what people expect in that way.

Jackman: Shooting later this year. "Les Mis" finishes around the beginning of June so we'll take a month down and we'll get started. It's a Japanese saga, I'm very excited about it. It's looking good.