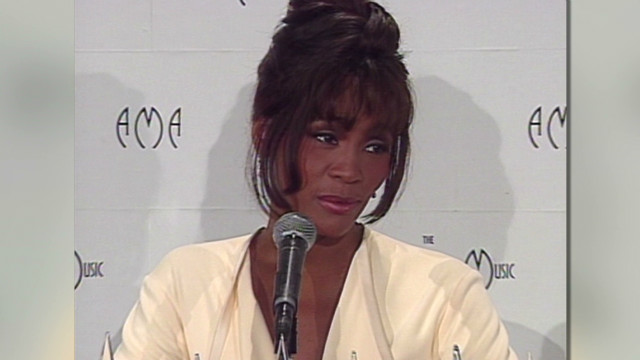 The entertainer, whose incredible talent was discovered at an early age, was pronounced dead at 3:55 p.m. (6:55 p.m. ET) at the Beverly Hilton hotel despite resuscitation efforts, a police spokesman said.

Beverly Hills Police Lt. Mark Rosen said there were "no obvious signs of criminal intent" and that the cause of her death is being investigated.

"I'm sure the whole show will be a tribute to her," Shaffer said about the Grammys. "Here is music's happiest night combined with such a sad note. You got to be some kind of philosopher to make some kind of sense out of this. I certainly can't."

According to her official website, Houston sold more than 170 million albums, singles and videos. But she also struggled with addiction problems over the years.

Houston, whose hits included "The Greatest Love of All," died on the eve of the 54th annual Grammy Awards at the Staples Center in Los Angeles. She had performed as late as Thursday night at a pre-Grammy event in the area. A pre-Grammy party was scheduled Saturday night at the Beverly Hilton.

Music producer Jimmy Jam, after conversations with those heading up to Sunday's night show, told CNN that he believes the event will change significantly -- including a tribute to the singer.

The entertainer recently returned to a movie set for "Sparkle," a remake of the 1976 hit, which was loosely based on the story of The Supremes. It is scheduled to be released nationwide in August, according to Sony Pictures. It was her first movie role since "The Preacher's Wife" in 1996.

News of her death elicited a flood of reaction from fans and fellow celebrities alike.

Singer Aretha Franklin said, "I just can't talk about it now. It's so stunning and unbelievable. I couldn't believe what I was reading coming across the TV screen. My heart goes out to Cissy (Houston's mother), her daughter Bobbi Kris, her family and Bobby (Brown)."

What will Grammys do?

Dolly Parton, who wrote "I Will Always Love You," said, "mine is only one of the millions of hearts broken over the death of Whitney Houston. I will always be grateful and in awe of the wonderful performance she did on my song and I can truly say from the bottom of my heart, 'Whitney, I will always love you. You will be missed.'"

Another entertainment legend, Quincy Jones, said he was "absolutely heartbroken" by the news. "She was a true original and a talent beyond compare," he said.

Houston's body of work included a string of Billboard No. 1 hits in the 1980s, including "Saving All My Love for You," "How Will I Know," "The Greatest Love of All," "Where Do Broken Hearts Go," and "I Wanna Dance With Somebody (Who Loves Me)."

Billboard put her soundtrack to the 1992 movie "The Bodyguard" as one of the top 10 biggest-selling albums of all time. She also starred in the film with Kevin Costner. The soundtrack included the hit,"I Will Always Love You."

Davis reportedly spotted Houston 20 years later in a New York nightclub, signing her on the spot, according to her website. Davis steered Houston's career for more than 25 years, also serving as a mentor.

Just Thursday, Davis told CNN's "Piers Morgan Tonight" that, with Houston, "I saw a depth and a range and soul ... that rarely ranks at the top level. And that's why we've been working together ever since."

The singer's rendition of the national anthem at the 1991 Super Bowl, days into the first Persian Gulf War, earned raves and cemented her place in the American musical landscape.

After "The Bodyguard," Houston went on to appear in several more films in the 1990s, including "Waiting to Exhale."

In 2000, Houston earned her sixth Grammy for best female R&B performance and, a month later, she was named female artist of the decade at the "Soul Train" Music Awards.

Message to Bobbi Kristina: Be true to you

Her career stalled, however, in subsequent years as she entered rehab for addiction problems.

Houston took a hiatus for several years before releasing her first album in seven years, "I Look to You," in 2009.

"I just took a break, which sometimes you have to," said Houston. "You have to know when to slow that train down and kind of just sit back and relax for a minute."

In May 2011, Houston got help for her much-publicized struggle with drugs and alcohol, her representative said at the time.

In a 2009 interview with Oprah Winfrey, Houston recalled how her mother arrived one day at her doorstep at her daughter's house with sheriff's officers and a court order in a drug intervention. She talked about doing cocaine and smoking marijuana.

"(My mother) says, 'I have a court (injunction) here,'" Houston said. "Either you do it my way, or we're just not going to do this at all. We are both going to go on TV, and you're going to retire.'"

Houston had a high-profile and tumultuous marriage to Bobby Brown, a former "New Edition" star who has had multiple brushes with the law. The couple appeared together in the mid-2000s on the reality show "Being Bobby Brown." They had one child together, Bobbi Kristina.

Houston was the cousin of Dionne Warwick, another acclaimed performer.

Singer Lionel Richie told CNN that Houston was one of the best.

"She had that voice that could just turn a story, a melody into magical notes," Richie said.