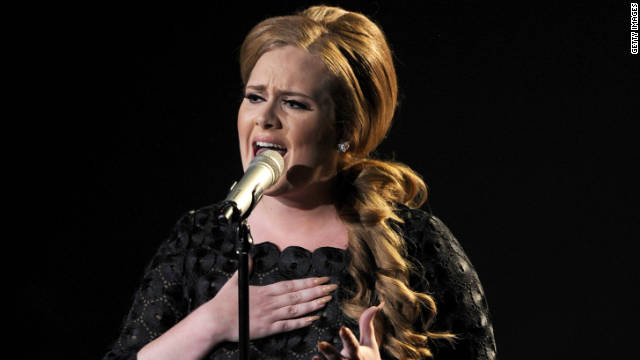 Adele will perform at the Grammy Awards on Sunday. It's her first time taking the stage since having throat surgery in November.

(CNN) -- With nothing more than a piano, a little black dress and a microphone, Adele rouses crowds using her emotions and her voice.

It's her modus operandi, and it's likely how viewers will see the British songstress perform at the Grammy Awards on Sunday.

The awards show will be Adele's first time taking the stage since she underwent laser microsurgery on a benign polyp on her vocal cords in November. That, in addition to the fact that she's credited with the music industry's 2011 uptick, means all eyes will certainly be on her.

Nominated for six Grammy Awards, including nods for album of the year and song of the year, Adele surprised fans when she tweeted about her impending performance.

Keith Caulfield, the associate director of charts at Billboard, said he expects the singer to captivate viewers on Sunday night, just as she did at the BRIT Awards in February 2011 and then again at the MTV Video Music Awards in August.

Adele the belle of the Grammy ball

"On the off chance that she has a bum note, everyone has survived from a not great performance," Caulfield said. "I don't expect anything less than really good."

And still, a simple performance will be enough, he added.

"You don't see pyrotechnics and fog behind Adele," Caulfield said. "She doesn't need that. ... There are no bells and whistles. It's just her, great song writing, a beautiful voice and great charisma."

"Every year, some album ends up at No. 1," said David Bakula, Nielsen's senior vice president of analytics for entertainment. "There's always going to be something that rises to the top. But when it's this unique and sales are this unprecedented, it's special."

"19" sold 460,000 units in 2009, the year Adele won two Grammys for the album. But, more than three years after its release, the singer's catalog title had its best week in December, selling 71,000 units, Bakula said. And so Adele finished out 2011 with two of the year's best-selling albums.

"It does take a very special artist, and a very special song and album release, to move the type of quantities we're talking about here," Bakula said.

According to Nielsen SoundScan, "21" is the first album to sell more than 1 million digital copies in a year.

"People say, 'How can there still be 100,000 people who don't have this album?' ... It just shows the latent demand for great music out there," Bakula said.

And there's a good chance that after Adele performs at the Grammys, the numbers will continue to grow throughout 2012, he added.

"Every day, more and more people are just discovering her, or just being convinced that they should buy her album and not be content with listening to her on Spotify or YouTube," said Caulfield, the associate director of charts at Billboard.

Speculation was heavy as to whether the British chanteuse would be able to perform at the Grammys after her surgery.

Since the debut of her sophomore album, there have been breathless reviews and almost constant praise heaped upon the single-named singer. She's even crossed over into meme territory in the form of a "S*** Adele says" video.

During her February 2011 appearance on E!'s "Chelsea Lately," Adele said she sees the constantly evolving interest in her music firsthand at her shows.

"I love seeing the way people respond to my music," she said. "I love it when, like, a husband or a partner gets dragged along who doesn't want to be there, and you've got to win them over because they're giving you the evil (eye). ... And by the end, they're hugging their girlfriend ... or crying. I love it."

Because her vocal cord issues forced her to cancel the remainder of her 2011 appearances, she wasn't able to convert the disillusioned partners that might have been present at her shows.

After falling ill, Adele stayed off the radar to rest up, Caulfield said, adding, "Meanwhile, her singles are going to No. 1, her albums continue to sell -- that's the kind of career an artist would kill for. ... Everyone else is slogging around ... doing TV shows and concert tours."

Bakula agreed, referencing artists such as Lady Gaga and Katy Perry, who made their presence known in 2011 with advertisements and various appearances.

Yet, Adele's singles are still permanent fixtures on the radio, but not in the same way that Bruno Mars and the Black Eyed Peas are, Yahoo.com music columnist Paul Grein said.

"(Some pop artists) live and die by their latest hit single," Grein said. "And Adele, even though she's having big hits, too ... you have the sense that her career probably won't always be as a big radio star."

She could be compared to someone like Sade, he said, "who has had hits, or not had hits, but has sold albums throughout a very long career."

Regardless of how we're hearing her music, Caulfield said, many people are finding it "refreshing that it isn't necessarily programmed for your enjoyment."

In fact, some people have said her music is actually programmed to play in the background while you weep. And there's a "Saturday Night Live" sketch to prove it.

One Boston Globe writer even profiled a few people brave enough to admit to crying along to Adele's "Someone Like You."

"(Adele) really struck a chord at the right time," Bakula said. "As soon as people heard it, it was gold. Well, platinum, in this case."