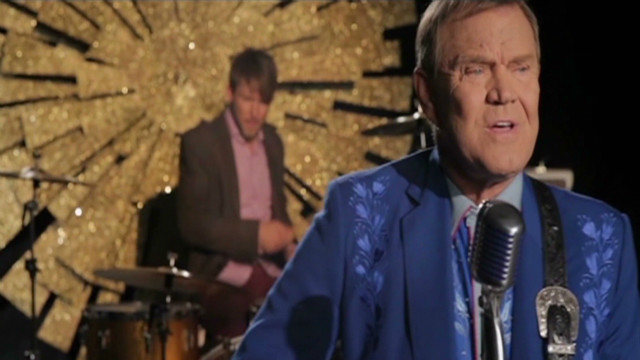 (CNN) -- Last June, Glen Campbell stunned fans when he revealed in a press release that he was suffering from Alzheimer's disease. It was not an easy decision to go public with his private struggle, but his family felt it was a decision that needed to be made.

"The main thing we were concerned about was during shows he would forget a line or get a little confused," says Campbell's daughter, Ashley. "People would think, 'Is he drunk?' Is he doing drugs again?' So we didn't want people to get the wrong impression."

But an interesting thing happened after the Alzheimer's announcement. Instead of fading off into the sunset like a forgotten icon, the 75-year-old entertainer has been catapulted back into the spotlight -- and the music industry can't seem to shower him with enough accolades.

In November, he was the subject of a star-studded tribute at the CMA Awards show, and on Sunday night, he'll pick up a Lifetime Achievement trophy at the 54th annual Grammy Awards.

Behind the scenes, it's been somewhat of a standoff between the CMAs and the Grammys, with each telecast vying for bragging rights to have Campbell perform. But there's nothing like the pull of the Grammys -- especially when you're a five-time Grammy winner.

At the CMAs, Campbell beamed from the audience while Keith Urban, Brad Paisley and Vince Gill serenaded him with his biggest hits, but the Grammys will be a different story. Campbell himself will take center stage for "Rhinestone Cowboy," flanked by Blake Shelton, The Band Perry and his own band -- which features three of his grown children.

It'll be his first live television performance since the Alzheimer's diagnosis, and thus, it will also be a bit of a cliffhanger.

Last fall, Campbell released his final album, "Ghost on the Canvas," then hit the road on what he's calling his farewell tour.

Most of the time, he sails through his set like the charismatic veteran he is. Three teleprompters at the foot of the stage enable him to read his lyrics, and when he flubs a line here or there, he usually laughs it off. But there are rare moments when he'll become a little disoriented, and that's when it helps that he's surrounded by family on stage. Son Cal keeps things steady on drums, while his brother, Shannon, plays guitar nearby. Their younger sister, Ashley, stands protectively to Campbell's left, on keyboards, banjo and violin.

"He looks at me sometimes if he is confused, and I just smile at him. I just try to make him feel like he is surrounded by people that love him on stage," says Ashley.

While most people with Alzheimer's drift in and out of lucidity without fanfare, you know exactly when Campbell has hit a rough patch. He'll be playing a song on guitar that he's played a gazillion times, like "Wichita Lineman," then all of a sudden hit a bad chord or forget the lyrics. It's like a light switch.

In concert, fans are happy to fill in the gaps when he has a senior moment, singing his lyrics back at him until he finds his way again. Campbell's wife, Kim, watches serenely from the soundboard, knowing full-well that these incidents will occur from time to time. But the whole family has made peace with it, including Campbell.

He tells CNN, "I am content with it. Don't cry over spilt milk. Get up and be a man and do what you have got to do."

CNN recently sat down with Glen and Kim at their home in Malibu, in a room overlooking the California coast. Several guitars were on display within arm's reach. Others laid in cases in the entryway, ready to head out on the road. In another room, platinum and gold records lined the walls, documenting the success of "Wichita Lineman," "By the Time I Get to Phoenix" and "Rhinestone Cowboy."

CNN: How does it feel to be receiving a Lifetime Achievement Award at the Grammys?

Glen Campbell: I am flattered. I really am. All I wanted to do every since I could remember was play my guitar and sing.

CNN: You came out to Los Angeles in 1958 to be a guitarist. Did you ever see yourself becoming a big star?

Campbell: I never really thought of it! I'm a musician first. So when I got the job playing guitar with the session players, I said, "Yay, I can play." I was a little scared. I was a little nervous, but when I got in with The Wrecking Crew, I realized that I could cut it out here, and could do it. I played with the Beach Boys, Frank Sinatra, Elvis, the Righteous Brothers, the Monkees.

CNN: You're known as a great guitar player, but did you ever take a formal lesson?

Campbell: No. I can read a chord chart, but I couldn't read a note chart.

CNN: Are you nervous about taking the stage these days?

Campbell: I realize you are going to make mistakes through life. Just don't make any bad ones, you know. Like all of my records are perfect records, but I did make mistakes on them. I would rather do live than any kind of lip-synching or something like that. I don't like to lip-synch.

CNN: What has been the reaction from fans?

Kim Campbell: Boy, were we pleasantly surprised. They have been more than understanding. They have really just been rooting him on. It is really encouraging.

Glen: I don't see myself any different, though. I'm forgetful.

Kim: I actually think he is better than he was a year ago. I think that being out and performing all the time has something to do with it. Music seems to be really good therapy for him. I don't know if it is the vibrations. Maybe they stimulate the brain. Of course he is on some medications today that I think have been helping, too. So we are blessed to be living in a time when there are some treatments. There is no cure, but there are things that can help, and they are helping.

Glen: What did they diagnose me as?

Kim: You start losing your memory and your ability to reason.

Glen: I just take it as it comes, you know. I know that I have a problem with that, but it doesn't bother me. If you're going to have it handed to you, you have got to take it, anyway. So that is the way I look at it.

CNN: You went down to Nashville for the CMA Awards in November. Seemed like you knew a lot of people there.

Glen: What is his name -- the one who married that long-legged girl?

Glen: Yeah, Keith Urban. He is probably the best guitar player in Nashville.

Kim: And Brad Paisley. They are two of his favorites.

CNN: The two of you have been married nearly 30 years. Did you really meet on a blind date?

Kim: I was dancing with the Rockettes at Radio City Music Hall.

Glen: They had a bunch lined up and I thought, "I'll take that one there." No, I'm kidding.

CNN: Was it love at first sight? Kim, at that time, he was kind of a hell-raiser.

Kim: I really didn't know anything about that, because I was a dancer, and I just had my head into Broadway and I didn't read the tabloids. But I knew he was a singer. And then I went to one of his concerts -- "Oh my goodness, I remember that song. I remember that song." He had a lot of hits. So then I got a little more intimidated, but I really just didn't know much about him.

CNN: You've had your ups and downs.

Glen: I was forgiven for being a dummy, literally. I have been through so many changes. The first part of my career, everything was not in place.

CNN: Do you pray every morning?

CNN: What do you ask for?

Glen: Mainly thanks. Thank you, Lord, for letting me get up this morning. Let me have a good day. And if you don't, I will come up there and get you! And he laughs at that.