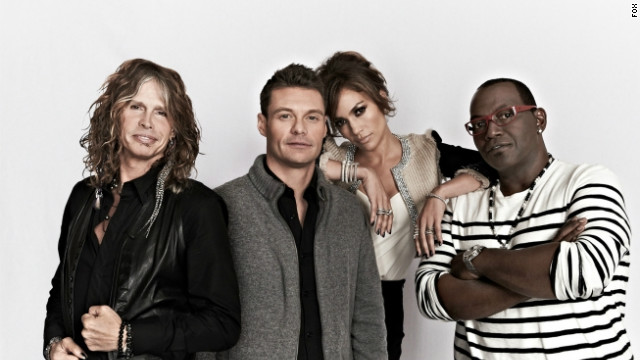 Fox has weathered plenty of media coverage over the past several years of "American Idol" panel changes.

(EW.com) -- The changes to Fox's singing competition shows have only just begun.

After weeks of dramatic headlines about "Idol's" slipping ratings and "Factor's" talent departures, Fox's president of alternative entertainment Mike Darnell spoke to EW about the challenges faced by "American Idol" and "The X Factor" -- and his strategy for remaining on top.

Given their large number of hours and consistent ability to win time periods, one could argue that "Idol" and "Factor" are the No. 1 network's most important shows. So what does it mean when the bulk of the "Factor" cast abruptly gets pink-slipped and "Idol" has CBS' "Big Bang Theory" nipping at its heels on Thursday nights?

With "Factor", the sudden exodus of host Steve Jones, judge Nicole ‪Scherzinger‬ and executive producer Simon Cowell's longtime TV-spouse Paula Abdul may have stunned observers (L.A. Reid will return). Yet the move was somewhat less surprising to followers of the UK version, which sheds judges every few seasons. In a genre where tough-love auditions are the heart of the format, Darnell described being a star on "Factor's" debut as not entirely dissimilar to being a contestant.

"Season one was basically an audition act," said Darnell late last week. "Simon got one big new star out of it -- L.A. Reid, and that was great casting. There's going to be a natural reassessment."

Viewers largely accepted the departure of Jones and ‪Scherzinger, yet the loss of Abdul raised concern. She may not have been the strongest contributor to the show, the reasoning went, but she didn't seem to be an overt problem either. "Paula was an interesting call," Darnell said. "She and Simon are great friends, so it was just a dynamic conversation about what's the nature of the group going to be. And I think we decided to pull the Band-Aid off as quickly as possible."

Fox hopes to fill the spots over the next several months. It's reasonable to expect the network will pursue big music stars, with the caveat that prospective judges also should also have workable chemistry with Cowell. The bottom line is that Fox wants to take a show that was already typically winning its night and find every way possible to improve it -- including brainstorming creative changes apart from the on-air talent.

"There definitely will be lots of different changes in the show," Darnell said.

That said, Darnell dismissed one TV critic complaint that the show seemed "inauthentic."

"That's the kind of stuff that pundits talk about that doesn't mean anything to the audience," he said. "It was a very consistent audience for that show. The audience that stuck with the show loved it."

Over on "Idol," Darnell faces the trickier challenge of keeping an 11-year-old hit feeling fresh and compelling without altering its popular fundamentals.

Asked why "Idol's" ratings have softened, Darnell agreed with TV analysts who point to the flood of singing competition shows. Idol used to be an annual event. Now there's wide-eyed young singers, brutal judges and suspenseful eliminations on TV all year around. The other programs include Fox's own "Factor," of course (when Cowell decided to launch a U.S. version of his UK hit, Fox had little choice but to get on board, lest risk losing him to a rival network).

"There's no question there's a glut of [singing competition shows that are] affecting the numbers for Idol," Darnell said. "It's the granddaddy, it's run is unprecedented. I think that considering all the other shows and its age, it's doing quite well. Having both shows on our air has put us in an incredibly strong position as a network."

"Idol" is still a No. 1 for the season and averages about 20 million viewers a week. While "Big Bang" and ABC's "Modern Family" are closing the gap, "Idol" generates more than 50 hours per season compared to roughly 11 for half-hour comedies (no drama series come close to Idol's numbers).

Like with the recent "Factor" headlines, Fox has weathered plenty of second-guessing media coverage over the past several years of "Idol" panel changes. Some pundits predicted Cowell exiting the show two years ago would be a fatal blow, especially since the ratings were already declining. Yet when looking at the ratings, "Idol" changes over the years seemed to help offset audience erosion.

"Idol" typically only dropped about 10-12 percent each season despite its age, often returned better than most industry observers expected. After last year's well-received addition of judges Steven Tyler and Jennifer Lopez, making further alterations would have appeared foolish -- why fix a show that wasn't broken? But with the new season's ratings down more than 20 percent, it raises the question: Is "Idol" at a point where it now requires major changes each season to keep fans' interest?

Though making a judgement on next year's "Idol" panel is months away, Darnell noted viewers can expect to see some twists this season.

"There's always freshening up," he said. "We've done rule changes, we've eliminated the middle rounds, we put in the judges' 'save.' And there will be some changes coming to the show this year that no one knows about yet, [though] they're more modest than last year. What you try to do generally is if you have a year of big changes, you try to let those settle for at least another year. Change can help, or it can kill you if it's the wrong change. You never want to change the core of the show, no matter what the competition is doing, because that's what people come back for."

One frequent point of viewer debate is the number of good auditions vs. humorously bad auditions. As with every aspect of his shows, Darnell has given the matter plenty of thought and experimented with different possibilities.

"We used to have more bad than good," he said. "Over the last three years we've gone the opposite direction. I think it's a balancing act. One of the things that separate 'Idol' from the other shows is that we have the fun and funny auditions, that's why those [opening weeks] numbers are usually big. If you go too far in one direction or the other, that's a mistake. And you have to be careful about which bad auditions are shown. The William Hungs of the world work, but people dressed as bananas don't. They have to be sincere auditions."

And if the unthinkable happens. If "Idol," after eight seasons as TV's top-rated entertainment program, should slip ... Darnell predicted the network -- and the show -- will survive just fine.

"It would be nice to reign forever as No. 1," Darnell said. "But if 'Idol' ever becomes a second- or third-place show, it still has a much bigger impact and value than most other shows because it accounts for so many more hours. Obviously all shows come down, but to still be at this level is amazing, and we're really grateful for that."