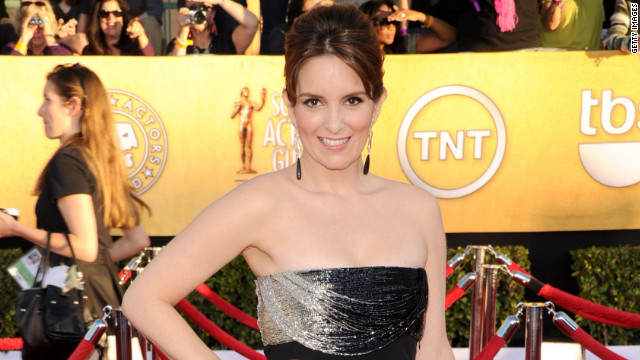 Sources close to the talks say Tina Fey would most likely remain behind the scenes of "Fancy Nancy."

(EW.com) -- "Fancy Nancy" is putting together an appropriately fancy line-up of talent as she makes her way to the big screen.

"Night at the Museum" and "Real Steel" filmmaker Shawn Levy just signed on as producer, and now "30 Rock's" Tina Fey is in talks to help him bring the sparkly little girl to life, sources close to the project tell Entertainment Weekly.

The homemade princess would undoubtedly be very pleased.

For those not in the know, the "Fancy Nancy" series of storybooks are about a little girl who likes to say "bonjour" instead of "hi," is obsessed with extreme dress-up, and attempts to bedazzle the boring, plain world around her in a way that would make even Elton John go, 'Phh ... tacky." Of course, even the most hardened cynics eventually warm to the elegant way she envisions the world.

The books, written by Jane O'Connor and illustrated by Robin Preiss Glasser, were optioned this week by 20th Century Fox for 21 Laps Entertainment, Levy's production company, and Fey is currently negotiating to join him as co-producer on the live-action feature. The two previously worked together when Levy directed her and Steve Carell in 2010′s "Date Night."

Sources close to the talks say Fey, who wrote 2004′s "Mean Girls," would most likely remain behind the scenes, and isn't expected to take an acting role in the film.

Since the character first appeared in 2005, there have been at least 46 "Fancy Nancy" books from publisher HarperCollins, with over 20 million in print, spawning a number of popular dolls and toys, and becoming a must-have birthday party theme for all the fanciest little girls.

Levy and Fey, who each have daughters (he has four, she has two), are probably well aware...