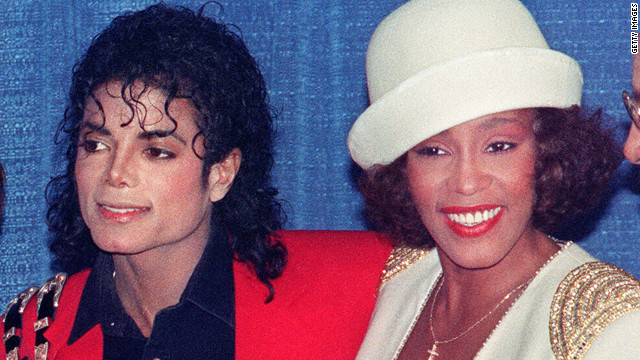 Some fans claim Michael Jackson and Whitney Houston are among a list of musical icons that left before their time.

(CNN) -- Another musical titan whose soaring voice ruled the charts for decades has fallen.

"First there was MJ, then there was Heavy D and now Whitney," said Shaun Jones, 47, of Titusville, Florida, adding that he jumped out of bed in disbelief when he heard news of Houston's death.

Rapper Heavy D died last year, as did Nick Ashford, who was one half of the Motown duo Ashford and Simpson.

And in late 2010, singer Mary Christine Brockert, better known by her stage name Teena Marie, died in her sleep.

"It's shocking ... all these people are legends. A lot of them are dying too young. It's crazy."

Pop icons such as Houston enjoyed staggering success through the 1980s and into the 1990s, and served as role models to a generation of singers today.

Announcements about their deaths are always almost followed by tributes from younger pop stars acknowledging how much influence they've had on their careers.

"Icons from that era stood out," Jones said. "They had distinct voices -- I can always tell when a song is by Whitney -- they made music back then."

Stunned celebrities who gathered for pre-Grammy festivities in Los Angeles expressed their shock Saturday night as fans worldwide paid tribute to the singer whose music spanned borders and generations.

"I remember dedicating some Whitney songs while writing letters to girls in my high school," said Mark Keith Muhumuza, who lives in Kampala, Uganda.

The 26-year-old said his favorites included "The Greatest Love of All" and "I Will Always Love You," which topped the Billboard Hot 100 for the second-longest reign in the chart's history.

Houston's decorated music career included smash hits such as "I Wanna Dance With Somebody," six Grammys and a slew of Billboard and American Music Awards. She also appeared in movies such as "Bodyguard" and "The Preacher's Wife."

"She was fresh, her music just drove everybody to want to dance," Jones said. "We all knew she was gonna be somebody -- I can't believe she's gone."

While she ruled as the queen of pop in the 1990s, a rocky personal life tainted her skyrocketing success.

Her marriage to Bobby Brown and their tumultuous years were marred by allegations of drug abuse and domestic violence. The pair starred in a reality show, "Being Bobby Brown," an unflattering look at their challenges as couple.

"Despite her personal setbacks, I never stopped believing in Whitney," Jones said. "It hurt me, and I'm sure it hurt a lot of fans. ... But she was trying to turn her life around. People always remember the bad things, but I am going to remember her for the good things."

Like Jones, her fans say they will focus on her legacy as a singer and the happy memories she brought to their childhoods.

"I can still remember riding with my sister as a teenager and first hearing, 'I Will Always Love You' on the radio. It was the most beautiful song that I had ever heard. It was breathtaking," said Traci Nichols of Bowie, Maryland. "Whenever I had a bad moment, I would play Whitney's CDs and sing along with them, and then, I would immediately feel better. I still do this because her music continues to uplift me."

She had a mesmerizing voice and a perfect poise, Nichols said, a trait that made fans feel connected to her.

"When I was a kid, she was the one I wished I could be -- supremely talented, gorgeous, amazing effortless performances, and she looked like she was having so much fun," said Marina Nelson, a San Francisco resident. It's a shame she didn't have a happier life while her music provided the soundtrack for so many fun times when I was growing up."

Nichols plans to do her part to ensure that despite Houston's untimely death, her legacy will live on.

Come Monday, she will discuss the legendary singer's appeal with her 11th-grade students.