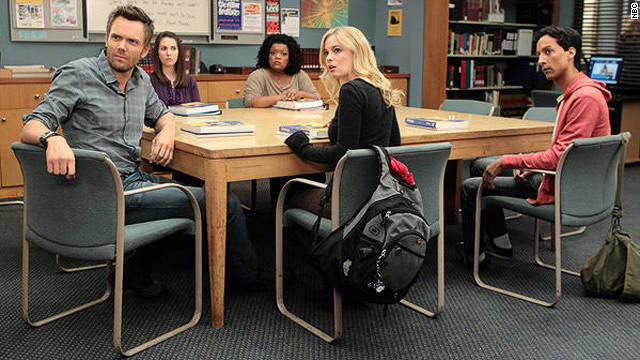 The not-so-great news: It's going right back into 8 p.m. against CBS' "Big Bang Theory."

NBC was toying with the idea of giving "Community" a different time slot than opening Thursdays against "Big Bang," where it's struggled in the past. But perhaps after seeing how, say, "30 Rock" has fared in the slot recently, they realized "Community" isn't the worst option here.

"Best Friends" and "Betty White" will take the place of "Whitney" and "Are You There, Chelsea," both of which will have aired all of their episodes (22 and 12, respectively).

"Bent" is about a "romantic comedy about a womanizing, surfer dude contractor (David Walton) and his beautiful, no-nonsense, type-A client (Amanda Peet), who work together to remodel each other's lives as they renovate her Venice, California, home."

"Best Friends Forever" is about a two longtime friends (Jessica St. Clair and Lennon Parham) who move into a Brooklyn apartment. "Betty White's Off Their Rockers" is a Punk'd-style show with a cast of "sassy septuagenarians."