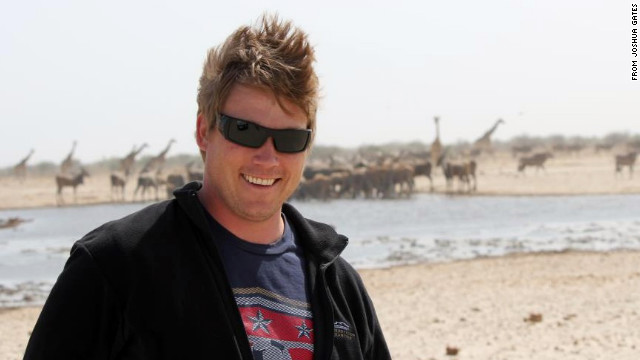 Jeff Rice was found dead on the balcony of his hotel room in Uganda last week.

Rice's body was found late last week on the balcony of his hotel room, according to a police statement issued Thursday.

A "whitish powder in a plastic bag" found in his room contained "opiates" associated with cocaine, police said. A "principal metabolite of cocaine" was found in urine and blood taken from Rice's body during the autopsy, the statement said.

Nothing appeared to be missing from Rice's hotel room, police said.

"Jeff was on a film production in Uganda and was doing what he loves. ... He was a true asset to the film industry worldwide and Africa was his 'home,'" Blackman wrote. The nature of Rice's work in Kampala was not immediately known.

Earlier Wednesday, Blackman wrote CNN in an e-mail that "this is a tragic event and it is unbelievable to read the messages of how many lives (Rice) has positively influenced."

Rice is survived by daughters, ages 2 and 7.

The U.S. Embassy in Uganda referred questions on the investigation to Kampala police.

Rice, who also served as a production facilitator, and Blackman were co-owners of SB Productions in Durban, South Africa. Rice was a native of Oklahoma.

He worked as a freelance facilitator for the latest season of CBS's "The Amazing Race," which wrapped up shooting months ago. Rice was not working with the show at the time of his death.

Bertram van Munster, co-creator and executive producer of "The Amazing Race," said in a statement that the show's team "is shocked and deeply saddened to learn of Jeff's untimely death. ... He was well liked and his work was highly respected."

Rice served as a production facilitator in 2010 for SyFy's "Destination Truth," the show's executive producer said in a statement. Shooting took place in Madagascar and Namibia.

He also assisted in production of "Whale Wars" for Animal Planet.

"(Jeff) became an absolute expert in how to do productions in countries all over the continent, from Tanzania to Madagascar," said Liz Bronstein, executive producer for Lizard Trading Co., which produces "Whale Wars." Rice "was given a name by the Zulu people: Lengai, which means 'a gift from God." I've never met anyone like Jeff. He made working in the toughest environments look effortless," Bronstein said in a statement.

Bronstein said Rice wrote her e-mails last week from Uganda indicating he planned to be in the country through mid-March.