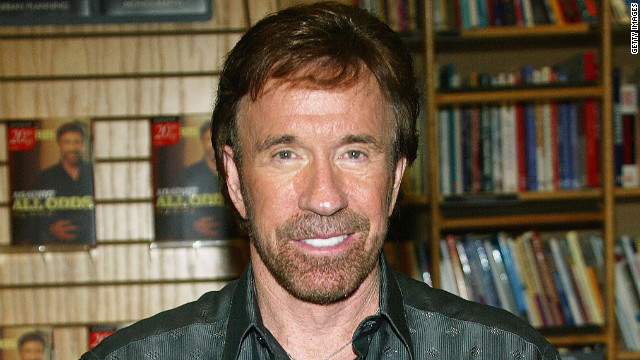 Chuck Norris explains his choice in an epic editorial on WND.

The actor, an avowed Republican, explains at the outset of an epic editorial on WND that, "As a six-time undefeated middleweight world karate champion, I have a pretty good idea what makes a warrior." In the nearly 1,400 words that follow, the fiery-spirited, flame-haired Golden Boot Award winner lays out the "the trifecta of tyranny" that Newt Gingrich, his new favorite Republican candidate is facing.

Namely, foe Mitt Romney's massive funding, the dreaded mainstream media (MSM), and the "elite power mongering" forces within the GOP party itself. As you might expect, Norris's editorial is peppered with phrases that would make you think Gingrich is a ninja assassin under siege of a thousand enemies -- not a doughy former college professor. Check out the top five soundbites below.

Honorable mention: "[Nancy Pelosi] chapped my hide [with] her clear audacity, arrogance and vindictiveness when she vehemently retorted like the wicked witch of the west: 'Mark my words: That man will not be elected!'"

5. "Newt spanked (with great audience fanfare) CNN's John King at the South Carolina presidential debate... [and showed his] ability to shut down the power grid of the MSM."

4. "While Romney decries that he is not a Washington insider, it is amazing to me that he gloats over the roughly 72 Washington elite who endorse him compared with Newt's 11. Rather than a badge of honor, that's a thorn of shame."

3. "Personally, I feel the entire future debate system should be derailed from the media's control and played out exclusively on C-SPAN with questions being fed entirely via the Internet from citizens around the country." [In Chuck Norris's world, political debates should be argue-to-the-death cage matches in the style of "The Running Man" or "The Hunger Games."]

2. "We must send someone in there who will turn over the establishment to resurrect the principles of our founding fathers and restore our republic."

1. "One cannot, in any way, underestimate the grisly enormity of this triple-headed monstrosity. It is a Goliath of ginormous proportions. And let there be no doubt: Only heaven and earth combining their forces will overcome this gargantuan foe." [Bonus points for use of non-word "ginormous." Chuck Norris doesn't follow the rules of grammar -- he rules grammar.]

Considering the colorful language and battle-ready atmosphere permeating the GOP primaries, is there anyone better to throw his hat in the ring than Norris? Then again, given Norris's losing history of endorsements (Mike Huckabee in 2008, Ron Paul just last year), should he throw in the towel as a political kingmaker? Or would the world be a lesser place without his vivid verbal artistry? Also, now that Donald Trump has endorsed Romney, are you ready for the iron-fisted ginger to face off against the big-mouthed duck 'do?