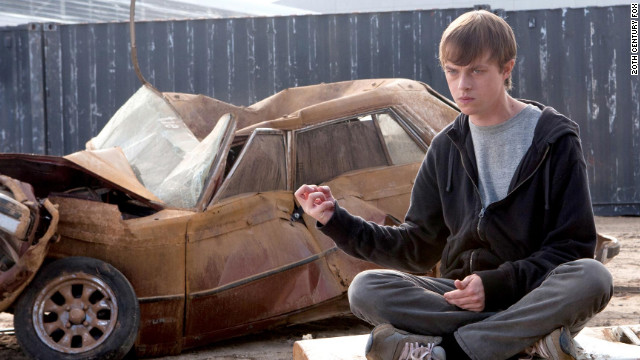 (EW.com) -- "Chronicle" sacked "The Woman in Black" at the box office on Super Bowl weekend, but both modestly-budgeted films exceeded industry expectations and brought in strong grosses for their respective studios.

Fox's $15 million found footage film "Chronicle," a thriller directed by newcomer Josh Trank about a trio of teenage boys who acquire super powers, soared into first place with $22 million in its first three days. That gave the film a potent $7,568 per theater average -- the best in the Top 20.

Awareness for "Chronicle" appeared disconcertingly low a few weeks ago, but thanks to an aggressive TV marketing push, a viral video advertisement ("Flying People in New York City"), and, perhaps most notably, the film's zeitgeist-y found footage appeal, the adventure managed to bring young people to the theater in droves.

The surprise hit received an average "B" CinemaScore grade, with generations divided on the found footage factor: Audiences under 18 gave the movie a "B+", while audiences above 50 issued it a "D+". Thankfully for Fox, older moviegoers don't make up "Chronicle's" target demographic.

What's new at the movies?

Despite the average grade, with reviews so much stronger than most films aimed at teens, and an encouraging 18 percent bump on Saturday (which suggests positive word-of-mouth), "Chronicle" might not plummet at the box office the way "F" graded "The Devil Inside" did a few weeks ago. There's no telling how high "Chronicle" will end up flying at the box office just yet, but with its impressive debut frame, the film is already a big hit.

While the execs at Fox are clinking their champagne glasses together, the suits over at CBS Films are likely getting ready to throw an all-out party after the the second-place debut of "The Woman in Black," which earned $21 million this weekend and became the young studio's first real hit.

The supernatural spookfest, which CBS acquired for just $3 million from British financier Hammer Film Productions, succeeded in capturing young viewers (especially young women) on opening weekend, and Harry Potter himself, Daniel Radcliffe, proved his drawing power outside of the Potter franchise -- something the Twilight stars have yet to do. "The Woman in Black" earned a lackluster "B-" CinemaScore grade, but, like "Chronicle," the film has already proved itself a major success.

In third, Liam Neeson's snowy survival entry "The Grey" dipped 52 percent to $9.5 million, giving it a ten-day total of $34.8 million. Don't be deceived by the brisk decline. Because of the Super Bowl, which will keep over 100 million Americans in their living rooms and out of theaters, studios are estimating drops in the 70 percent-range on Sunday, which causes most titles to have larger-than-usual weekend drops. "The Grey" is doing well.

"Big Miracle," Universal's family-friendly option starring Drew Barrymore as a woman attempting to save three whales locked inside Alaskan ice, swam away with a rather chilly $8.5 million in its first three days. The film, made for just under $40 million, couldn't capture the same size audience as fellow aquatic mammal offering, "Dolphin Tale," which started with $19.2 million on its way to a $72.3 million total last September. With an "A-" CinemaScore grade and strong playability among families, "Big Miracle" may hold well in the weeks to come. As it stands now, though, this whale tale looks dead in the water.

"Underworld Awakening" rounded out the Top 5, dipping 55 percent to $5.6 million. The $70 million 3D vampire action film has amassed $54.4 million after three weekends, making it the second-highest grossing film of 2012. What's ahead of it? Kate Beckinsale's other action vehicle, "Contraband," which has earned $61.2 million. Not a bad way to the start year!

A few milestones were achieved by Oscar contenders this weekend, too. "The Descendants'" $4.6 million frame helped it scoot right past $65 million in its 12th week. Best Picture favorite "The Artist" dropped 22 percent to $2.6 million in its 11th week, breaking the $20 million plateau in the process. "Hugo" fell by only 8 percent (the smallest drop in the Top 20) in its 11th week to $2.3 million, lifting its total out of the $50 million-range up to $62 million. (It's rumored to have cost over twice that amount.) And "The Girl with the Dragon Tattoo" came this close to a key milestone, but for now, it will have to settle for a $99.9 million total.