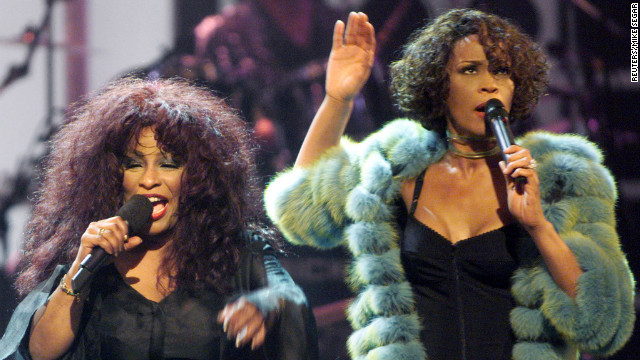 Cowell: Houston was the benchmark

Share your thoughts about the passing of musical superstar Whitney Houston.

(CNN) -- The sudden death of singer Whitney Houston at age 48 shocked fans and musicians all over the world. The outpouring of grief was immediate, with one common refrain: The world had lost one of its greatest singers.

Nearly all of the trends on Twitter worldwide were shortly associated with the singer's death: R.I.P Whitney Houston, #DearWhitney, #IWillAlwaysLoveYou, The Bodyguard, Bobby Brown and Wanna Dance With Somebody.

"The first full hour after the news broke saw 2,481,652 tweets and retweets, peaking at 61,227 tweets at 5:23 p.m. (all times are PST)," according to Topsy.com, which indexes and ranks results based on the most influential conversations on social media

"That is over a thousand tweets a second, not quite as much as during the Superbowl but still a lot."

"My thoughts and prayers are with her beautiful child and her entire family. This is a tough time for the entire music community, as we all loved Whitney. May she rest in peace and may we all dance with somebody tonight."

"My heart goes out to her family, to Clive (Davis, Houston's mentor), and to everyone who knew and loved this amazingly talented and beautiful artist. I will always love her."

"Whitney's voice was so special to me. Her notes soared to places most singers dream of reaching. She will be missed."

"I am beyond heartbroken. Whitney Houston was undoubtedly one of the greatest singers and performers of all time and such a huge influence on me."

"Heartbroken and in tears ... My heartfelt condolences to Whitney's family and to all her millions of fans throughout the world. She will never be forgotten as one of the greatest voices to ever grace the earth."

"I've known Whitney since she was a little girl and I loved her. She was like family to me. I will miss her."

"Sending prayers of peace and solace to her family, friends & fans! Such a loss! Whitney was always so sweet to me! Was rooting for her through her struggles! Such a shame ... I'm truly saddened by this news!"

"I just can't talk about it now. It's so stunning and unbelievable. I couldn't believe what I was reading coming across the TV screen."

"I am absolutely heartbroken at the news of Whitney's passing. Ashford & Simpson first made me aware of Whitney when she was just 16, and I always regretted not having had the opportunity to work with her. She was a true original and a talent beyond compare. I will miss her terribly."

"What a voice. What a beauty. What an actress. She had everything and she made us all feel so good when we heard her."

"I was the biggest fan of hers. She influenced me so much. She sent so much love out to the world and she was an inspiration for so many people, and we're there with her."

"Whitney was my musical hero ... the reason why I wanted to sing. I will never forget the voice."

"This is terrible news. I'm sick to my stomach. Nobody sang like Whitney. I hate this feeling."

"I found my voice singing Whitney Houston's music. Today I lost my idol."

"Whitney Houston was not only an amazing artist but also a beautiful person. She was so smart and her knowledge and appreciation for the musical art form was remarkable. Every time we would see each other, we always had wonderful conversations about life and the business."

"Jesus Christ, not Whitney Houston. Greatest of all time."

"Mine is only one of the millions of hearts broken over the death of Whitney Houston. I will always be grateful and in awe of the wonderful performance she did on my song and I can truly say from the bottom of my heart, 'Whitney, I will always love you. You will be missed.'"

"Whitney Houston, the singers' singer and voice that inspired the world. Many emulated, but there is only one Whitney."

"I can't believe it ...Rest in Peace Whitney. Descanses."

"I am deeply saddened and touched to the core of this news of my musical mentor Whitney Houston. I'll always love you. xo"

"I can't watch any more news. It's too painful when a sister-friend passes; don't want analysis ... want reflection. RIP #Whitney."

"R.I.P. Whitney Houston. Our prayers go out to Bobbi Kristina and her family."

"How tragic to hear about Whitney Houston's passing. Such a shame. She had one of the most iconic voices of my lifetime."

"RIP Whitney Houston. The soundtrack of so many lives. I'm sure heaven reverberates (to)nite with the sound of (your) voice. It always was angelic."

"We are deeply saddened by the tragic and untimely passing of Whitney Houston, whom we were blessed to have just completed work with on the remake of the film "Sparkle." ... At the apex of her career, Whitney had no peer, with a voice that shaped a generation."

"Whitney Houston was a true New Jersey treasure. Her terribly premature death is an awful loss for her family and the incredible New Jersey musical family. Her soaring talent put her in the pantheon of great New Jersey musical talents like Frank Sinatra, Count Basie and Bruce Springsteen."