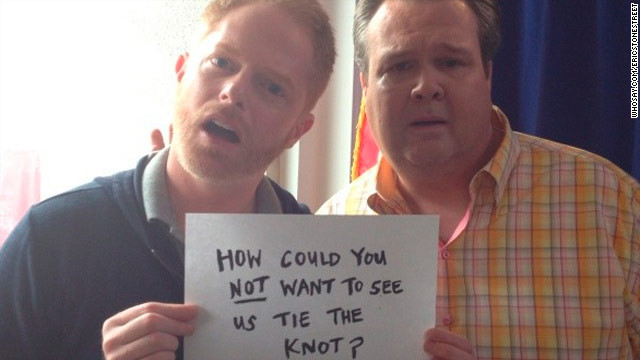 Jesse Tyler Ferguson and Eric Stonestreet took to Twitter to celebrate the striking down of Proposition 8.

"Proposition 8 serves no purpose, and has no effect, other than to lessen the status and human dignity of gay men and lesbians in California," wrote Judge Stephen Reinhardt in the decision.

In light of the announcement, celebs have flocked to Twitter to voice their excitement about the ruling.

@DamonLindelof: I try not to get blatantly political on twitter. That being said? UNCONSTITUTIONAL!!! WOOOOOOHOOOOOOOOOO!!!!!

@JuddApatow: "@jcolton: @JuddApatow can you slow down on the muppet cause for about half an hour? we just got good news re Prop 8." Awesome news !

@zacayoung: Since we are taking it to the supreme court, can we redesign the judges' robes? #sequins #Prop8

@TheEllenShow: Today we took another step towards equality. #Prop8 was found unconstitutional again. I couldn't be happier.

@chelywright: I am a gay American and it's my Constitution too. #NOH8

@adammshankman: Courts just AGAIN declared Prop 8 unconstitutional...CUZ IT IS!!! Supreme court, here we come! Equality...is our birthright! Its about time!

@sarahcolonna: It's a great day in California! Prop 8 ruled unconstitutional. Today, I'm very proud of where I live. #noh8

@SethMacFarlane: Prop 8 architects: Every civil rights battle is eventually won by the oppressed party. Save your hundred mil and buy some Bud platinum.