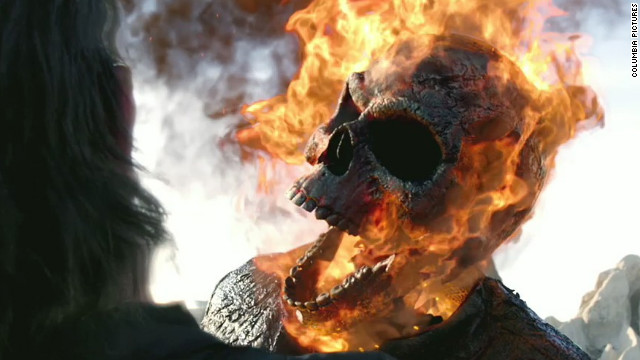 (EW.com) -- After last weekend's record-breaking pre-Valentine's Day frame, Hollywood is feeling hopeful about box office prospects during the upcoming holiday weekend, which will include four days of box office receipts.

Three new movies are hitting theaters -- action sequel "Ghost Rider: Spirit of Vengeance," romantic comedy "This Means War," and animated import "The Secret World of Arrietty" -- but "The Vow" won't relinquish the top spot so easily. Here are my predictions for the four day holiday weekend:

Last weekend's romantic victor has played well throughout the week -- it broke midweek records with its $11.6 million Valentine's Day haul -- and according to Fandango, "The Vow" is still this weekend's number one choice, accounting for 17 percent of Thursday's ticket sales -- the most of any film ("Ghost Rider" accounted for just 5 percent). It seems that the poorly-reviewed film has become something of an event film for women -- it may not be totally well received, but people want to see it because their friends have. "The Vow" may fall by about 25-30 percent over the long weekend and take in another $30 million.

Not many people thought that the original "Ghost Rider," which hit theaters over this very weekend in 2007, would earn a sequel. That film grossed just $115.8 million against its $110 production budget (a figure that does not include marketing costs), but apparently, its $228.7 million global haul was enough for Sony to greenlight a second film. Nicolas Cage is back as the flame-headed comic book character for "Spirit of Vengeance," which cost somewhere in the mid-$70 million range to produce. The presence of 3-D ticket prices should add a few million dollars to "Spirit's" opening, but because of the tepid reactions to the original "Ghost Rider," which opened with $52 million in its first four days, it's unlikely that this one will fare better. The film might ride away with a bit less than $30 million.

The Denzel Washington/Ryan Reynolds action flick should ride its "A-" CinemaScore grade to a successful second weekend. Direct competition from "Ghost Rider" may result in a slightly inflated 35 percent drop over four days, which would give "Safe House" a terrific $27 million.

More than any other film, "Journey" will benefit from the holiday weekend. The 3-D sequel remains the top choice for families, many of whom will be eager to keep their youngsters busy over the extended weekend. A tiny 5 percent drop would give the $79 million adventure a robust $26 million, lifting its total to $59 million after ten days.

Reese Witherspoon's last romantic comedy, "How Do You Know," was a critical disaster that crashed and burned at the box office, taking in a measly $30.2 million against a $120 million budget. Thankfully, "This Means War," which features "Star Trek's" Chris Pine and "Inception's" Tom Hardy alongside Witherspoon, will fare better. Granted, the film's breakout potential has been severely reduced by the complete box office dominance of "The Vow," which will steal away female audiences, but on a busy weekend, "War" could still find a decent crowd -- it drew about $1.7 million on Valentine's Day sneaks. Fox spent $65 million on the action-comedy, which will play in 3,189 theaters this weekend, and it seems headed for about $17 million.

Way further down the chart, Hayao Miyazaki's latest, "The Secret World of Arrietty," which is being distributed by Disney, will follow in the footsteps of his most recent entry, "Ponyo," which earned $15 million in 2009. Playing in 1,522 theaters, it may take in $5 million this weekend.