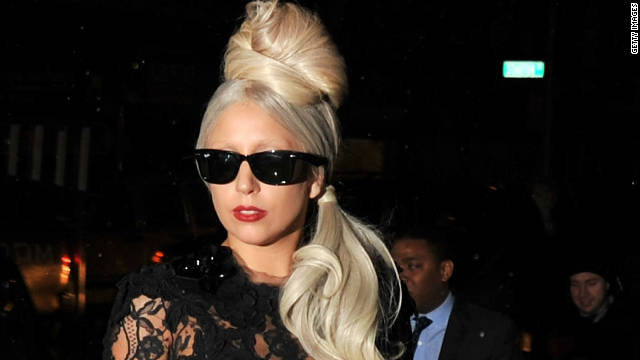 (CNN) -- We've come to know her as Lady Gaga, but before the world tours, "The Fame" or even the dress made of meat, photographer Malgorzata Saniewska knew her simply as her restaurant co-worker, Stefani Germanotta.

In the summer of 2005, Saniewska, who goes by Maggie, happened to be tending bar at the same West Village restaurant where the 19-year-old soon-to-be star worked as a waitress.

Just 24 at the time, Saniewska had moved from her native Poland to the United States two years prior with dreams of becoming a photographer.

But to support herself, "I started working as a bartender," she recalled. "It was definitely a money thing. I did want to go to school, but I didn't do research on photography, my focus was to make better money."

Keeping an eye on her bank account is what drove Saniewska to study accounting, leaving photography to become an amateur pursuit for a while.

She went from taking landscape photos of New York City to setting up her own shoots, with Gaga being among some of her first ones.

"We were colleagues, we didn't hang out really heavily, but she's the nicest girl ever. ... She's down-to-earth," Saniewska said. "At that time, she gave me a CD of her first single, and I listened to it and I was really impressed. And she's a beautiful girl. Based on her looks and her personality I thought (a photo shoot) would be great fun."

Back then, Gaga "played piano and sang. This 19-year-old girl, she was really talented. She didn't talk about it a lot, (but) she did say that she studied music. ... I cannot even explain to you what she sounds like with just a piano, then or now," Saniewska said. "I offered her the photo shoot, and she said yes right away."

Gaga had the perfect location in mind: Her parents' place on the Upper East Side. (CNN has reached out to Lady Gaga's rep for comment.)

The two young women hopped on a train and headed over there, and set to work creating what Saniewska says became Lady Gaga's first photo shoot, although Saniewska didn't know that at the time.

"The house was empty, it was just the two of us," Saniewska said. "I knew she was a singer, so our focus was her and her very first piano. We just hung out in her parents' living room, and the piano was right by the window."

"She's a good model, obviously," Saniewska added with a laugh.

"We basically walked into her house, she did hair and makeup, picked out the clothes and we started," she recalled. The lighting was natural: "No strobe lights, nothing special, no tripods," she said. "It was hand-held."

Saniewska, who's never been formally trained, said she shot around 200 photos that day. After culling through the resulting images, choosing the photos with the best natural lighting, she presented Gaga with a CD of the pictures. The burgeoning singer was happy with them, and used some of the art for her own promotional materials.

Of course, there's no way Saniewska could have known that the young woman she photographed on a summer day in 2005 would become the international superstar she is today. As a matter of fact, Saniewska says that at first, when she saw her as Lady Gaga, she didn't recognize her, having been accustomed to her as a long-haired brunette waitress.

Even as Gaga's fame continued to grow, Saniewska kept those early photos to herself "out of respect," she said, particularly because she wasn't in touch with her.

And then, she just so happened to bump into her old colleague in 2010.

"I actually ran into her in the East Village, and she came up to me. She was already Lady Gaga, and we spoke a little, and she leaned on me, and she said in my ear, 'Did you know that this was my first photo shoot?' I had no idea," Saniewska said. "She was really excited. From that moment on I figured I could do something about it. And she's OK with it."

Saniewska hopes that those viewing the photos will get to see another side of Gaga, a peek at who the star was before the world knew her name.

But even with all the fame, to Saniewska, she's "still the same girl. The fact that we ran into each other and she came up to me - she didn't say 'Hi' and run off. She stood there for 15 minutes, just chatting. She remembered my name, she remembered who I was, and she had so much to say. She's still the same person to me."