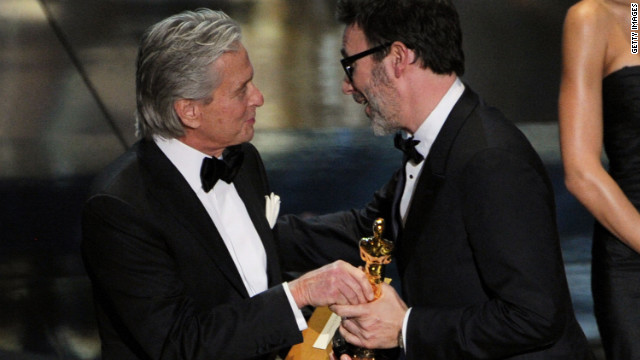 Editor's note: John Anderson is a film critic for Variety and The Wall Street Journal, and a contributor to The New York Times. He is the author of "Sundancing" and "I Wake Up Screening."

(CNN) -- Sunday night's Oscar telecast was enough to make you drop your knitting and stare in amazement at the contortions being performed on stage at the none-dare-call-it-Kodak Theater -- and not necessarily by Cirque du Soleil, whose performance was one of the evening's weirder moments.

Was it really just a year and a day ago that the Academy Awards made its big play for youth, via the double-edged disaster of James Franco and Anne Hathaway? OK, that didn't work. At all. But last night's full-frontal embrace of the past -- punctuated in no small way by the choice of a silent movie as Best Picture -- was a back flip, a half-twist, and a landing in deep denial.

It wasn't the Academy's fault that the show's director-elect Brett Ratner self-destructed, or that Ratner's hand-picked host Eddie Murphy bailed, or that the plucky Billy Crystal had to be called in to host a show he hadn't done since 2004. It isn't Crystal's fault that he's 63 years old. But someone -- producer Brian Grazer, perhaps -- should answer for why a show celebrating an industry in so much trouble chose to cast itself as something so profoundly passé.

Nostalgia wins big at the Oscars

Silence is golden at the Oscars

How it feels to win an Oscar

At a time when audiences are becoming increasingly disenchanted with the very "theatrical experience" the Academy spends so much time championing, why would the show's writers and producers characterize the idea of going to the movies as something quaint, nostalgic and on the way out? Time and again, participants reflected on moviegoing as something they remembered fondly from their childhoods. They might have been talking about the Civil War.

It was a strange tone to take, especially since anyone who pays any attention at all to the media -- or lives in Hollywood, or talks to other people -- knew that "The Artist" was poised to win Best Picture, Best Director and Best Actor (which it did). When you have an 800-pound metaphor pending delivery, why add insult to injury?

It didn't help, of course, that the show was being held in the erstwhile Kodak Theater, which had a name change since the venerable company filed for bankruptcy. Crystal never mentioned the word "Kodak," probably believing that it might make people in the film industry nervous that the company synonymous with film would be going out of business.

But it wasn't the issue of changing technology that gave last night's show a stale air. It was the issue of unchanging taste. Crystal, game as usual, opened the show with the same shtick he's used all of the nine times he's hosted, including the comedy montage of mock scenes from nominated movies. It's never had any edge and isn't intended to, but the general tone of the comedy was bloodless, and even blinkered: Delivering one gag about the advanced age of Best Supporting Actor nominees Max von Sydow and Christopher Plummer, the host suggested that next year's show would be sponsored by Flomax (the prostate drug).

This might have been funny, if 1) the disconnect between the Oscars and anyone under 30 wasn't so pronounced; 2) Plummer and von Sydow weren't among the classiest guys in the room; and 3) they weren't that much older than a lot of other people present. Plummer, showing that age is what you make of it, delivered the evening's most eloquent acceptance speech. But as deserving as he was (for "Beginners"), he couldn't help but point up the industry's affection for the past, especially its own.

No one can deny Best Actress Meryl Streep is almost routinely spectacular, or that she gave a marvelous performance last year, albeit in a mediocre movie ("Iron Lady"). But there were several supposed sure things going into last night's awards. And the only one that didn't come true was Viola Davis' selection as Best Actress for "The Help."

Granted, Streep's last win was 13 nominations ago (1983, "Sophie's Choice"). But given that Octavia Spencer took home the Best Supporting Actress award for "The Help," and got a standing ovation from the Oscar crowd besides, it makes you wonder. It could be that voters thought Davis' screen time was insufficient for the Best Actress prize, or that she wasn't the center of the story (Emma Stone was, arguably). But that's probably giving the Academy more credit than it deserves.

The fact is, Spencer gave a much broader, comedic performance; Davis' work spoke to the real pain of racism. Similarly, the choice for Best Documentary -- "Undefeated," the weakest among a pretty feeble list of nominees -- was about a white football coach and his black high school team, the kind of "Blind Side" vehicle that Academy voters gravitate to. Why? Because it makes them feel good without straining.

For a town synonymous with left-leaning politics, Hollywood has never looked so starched and conservative. The idea would probably make Rick Santorum recoil in horror, but Hollywood's embrace of the past is rooted in the same thing as Republican primary voters' embrace of reactionary candidates: A profoundly uncertain future. I like "The Artist" as much as anyone (OK, probably a little less), but for all its charms, it's not a forward-looking film. And last night's Oscars was not a forward-looking show. It was rooted in a kind of paralysis, the kind that accompanies a deep-seated fear.

The opinions expressed in this commentary are solely those of John Anderson.