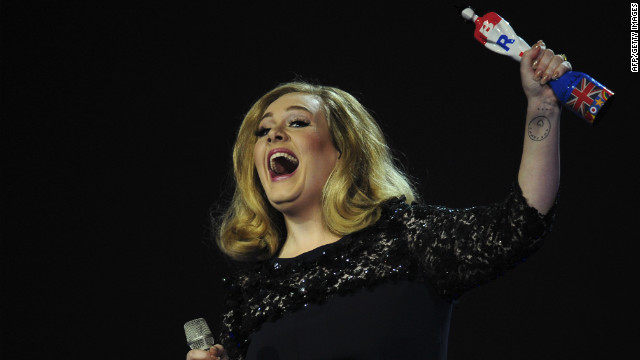 London (CNN) -- Singing sensation Adele continued rolling in the prizes at the Brit Awards in London, but she made headlines Wednesday for something else: she gave the middle finger when she was cut off during the live broadcast.

The British star, who raked in six Grammys last week, won best album at the Brits for "21," which featured the hit single "Rolling in the Deep."

But when Brit host James Corden cut her speech short Tuesday night, she made the rude gesture.

Adele, Corden and the station that broadcast the awards all issued apologies of one kind or another after the incident.

The singer said backstage that she "flung the middle finger. But that finger was to the suits at the Brit Awards, not to my fans.

"I was about to thank the British public for their support and they cut me off," she said. "Sorry if I offended anyone, but the suits offended me."

Corden, the comedian who hosted the show, later said, "Can't believe i was told to cut off the amazing Adele at the end. #Livetvnightmare," on Twitter.

ITV, the broadcaster, apologized to Adele for cutting her off.

"The Brits is a live event, sadly the program was over-running and we had to move on," a statement from ITV said. "We would like to apologize to Adele for the interruption.... We don't want this to undermine her incredible achievement in winning her incredible award."

Last week the 23-year old won all six Grammys she was nominated for, including album of the year.