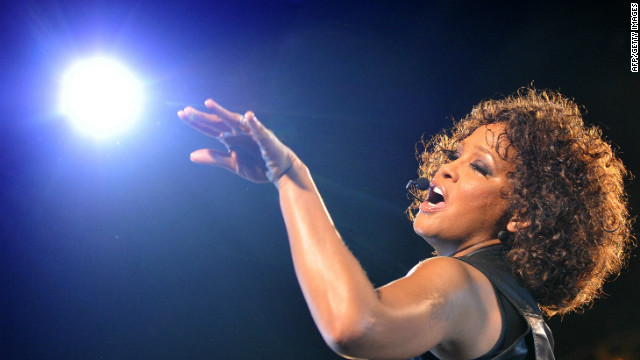 Whitney Houston performs during her "Nothing But Love" tour in Berlin on May 12, 2010.

Editor's note: Hilary Rosen is the former chairman and CEO of the Recording Industry Association of America and a CNN contributor. Follow her on Twitter: @hilaryr

(CNN) -- I met Whitney Houston after the debut of her first self-titled album on Arista Records. She was poised, graceful and strong. She was also sweet and laughed easily.

This seems unremarkable today other than the fact that strong women were not exactly well-supported in those days in the music business. As in other professions when a female artist was successful, she was often accused of being demanding and diva-like even when all she sought was the same respect or artistic license that men of their stature received. So Whitney's decency was noticed and her joy for singing was infectious. Her mother, Cissy Houston, hovered and I suspect had a lot to do with her staying grounded for as long as she did.

Whitney's voice soared. When she sang, our emotions rose and fell with her projection. Her articulation of lyrics combined with a smoothness in her timbre created one of the greatest musical voices of all time.

As with many famous people, the celebrity she achieved came with public attention beyond imagination -- and some of it wasn't always very kind. She was criticized after her first two albums for not being "black enough." Her ballads were attacked for lacking rhythm. Clive Davis, her mentor and executive producer, was accused of trying to keep her "white." It was all nonsense of course, but I am certain it was painful.

I vividly recall sitting next to a star who once had fame approximating Whitney's but whose revenues were clearly on the downswing, speaking loudly to the rest of her table about how awful and lucky Whitney was and how she didn't deserve her fame.

The jealously and vitriol were significant. At the same time, the adulation of her fans around the world was huge. Expectations for her were very high. As an African-American global superstar, she made a real difference in so many important causes.

She lent her stature to the anti-apartheid movement, to the response to the AIDS crisis and to the need for better educational opportunities for young black men and women. But no matter what she did, people always wanted more -- as we do of all stars. The public demand facing our celebrities is unrelenting.

Of course, I don't know what drove her to drugs in the beginning, but drowning out the intensity around her was surely one of the side effects she came to depend upon. And of course, then there is addiction.

As experts know, no matter how much consciousness you develop about your drug habit and no matter how much you want to quit, the chemical attraction is incredibly powerful and beckons over and over again. When sobriety makes apparent the reality of a disappointing showing at the box office, a failed new single or a harsh critical review, the failure that most of us bear in private is splashed on every media page in the world for all to see.

For some artists, their talent is a precious gift, and they honor it by loving and taking care of themselves. For others, it becomes a burden.

My favorite Whitney song is "The Greatest Love of All," a rousing anthem to learning to love yourself. It breaks my heart that the woman who inspired so much pride with this song suffered so much from her own demons.

Like Billie Holiday, Judy Garland, Elvis and others before her, that inner voice of doubt that we all feel sometimes just could never keep up with the public adulation.

And so the only answer in the moment that makes sense is to drown out the external praise and dull the doubt with drugs and alcohol. By many accounts from those close to her, she understood the dangers even as she was too often powerless to change. And she raised a wonderful daughter despite her troubles. That says so much about her determination to beat her addiction.

I wish that our intense media culture allowed more space for celebrating the positives about people while they are alive and struggling.

Whitney Houston's music legacy will be an inspiration to young artists for years to come. Without taking one thing away from her amazing talent and my total and complete admiration for her career, I hope her troubled life in the spotlight will also serve as the right warning as well.

The opinions expressed in this commentary are solely those of Hilary Rosen.