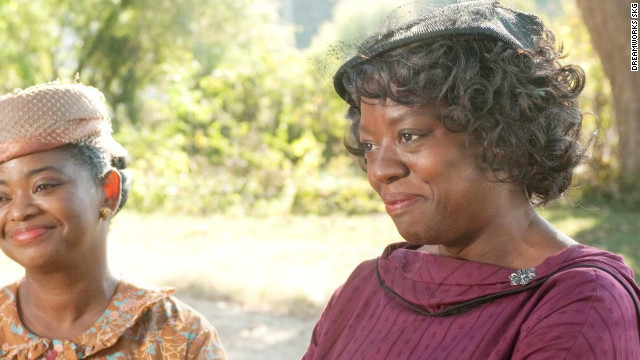 Viola Davis, right, shown with Octavia Spencer, was nominated for a Best Actress Academy Award for her role in "The Help."

(CNN) -- Viola Davis got a nod for best actress from the Academy this year for her role as Aibileen Clark in "The Help," and she must win, despite the controversy about the movie and the role she plays in it. If you believe what you read on blogs, black women long to be represented on screens large and small as rounded, complex characters, rather than wise, downtrodden burden-bearers and hot-blooded angry sex machines. Some say they want more black people telling black stories, which would be reasonable, if it were true.

I have been black a long time, and I can tell you that black folks are a persnickety lot. To get consensus, things have to be done The Right Way -- but there's no consensus on what that looks like. However, we seem to know what it is not. Lee Daniels' "Monster's Ball" and "Precious" contained the wrong message (white people saving black people) and "For Colored Girls" was tainted by Tyler Perry, a gifted director and storyteller given to more commercial fare, whom some saw as the wrong messenger.

The Popes of Blackness rarely agree on anything. One thing is certain -- Davis takes on a difficult role and breathes life into a hero who is inspiring, enraging, familiar and extraordinary. It is odious that the nominating committee gravitates to black people playing into conventional stereotypes. Nevertheless, that is not Viola Davis' fault. Given the state of the union, I think most any actor would be lucky to get work as a tree, forget about the layered role of a conflicted domestic in America's civil rights-era South. It is an incredible part, and Davis nails it. Not everyone is happy about that.

You may recall that back when the film was released in theaters, the aforementioned Popes espoused their disgust for a black woman acting as a domestic, which naturally made white audiences curious, turning both the movie and the novel it was based on into something of a sensation. I'm not sure why white folks loved "The Help" so much -- maybe because many of them grew up with an Aibileen of their own.

Films outside the comfort zone of mainstream black audiences seem to attract mainstream patronage en masse. Not that it matters, but from "Birth of a Nation" to "The Color Purple" and "Glory," black outrage often translates to box-office gold. Maybe mainstream audiences are more willing to confront difficult stories objectively, as opposed to bringing all their discontent and political baggage and such while shouting expletives at the movie screen.

I don't know what some black folks want from a film -- the Hollywood machine is an ugly marriage of art and business, propaganda and entertainment. People going to the cineplex in search of edification or some ethereal, cathartic moment of spiritual actualization should be in school or church -- because they expect more than they reasonably should from a movie.

Author Kathryn Stockett once referred to her novel as "civil rights fiction," which sounds more like bad PR coaching than a claim to take too seriously. The film, like the novel, is not about civil rights -- it is about prejudice, privilege and the price of dignity. It is about the things you learn about people when you step out of your comfort zone. The actress Octavia Spencer does her part, but Viola Davis carries this film on her back.

Some may be discouraged to see a black woman get an Oscar nod for playing a house cleaner -- never mind that women in their 40s of every stripe are having a hard time everywhere in Hollywood. Viola Davis is a gifted actor -- smokin' hot! -- but not buxom, biracial or conventionally beautiful. She already has a truckload of Tony and other theater awards, just got a SAG award, and works steadily. Her nomination pushes an opening door even further, soliciting an appreciation for the beauty of dark skin, full eyes and lips, and a new beauty aesthetic for Hollywood to consider.

The opinions expressed in this commentary are solely those of jimi izrael.