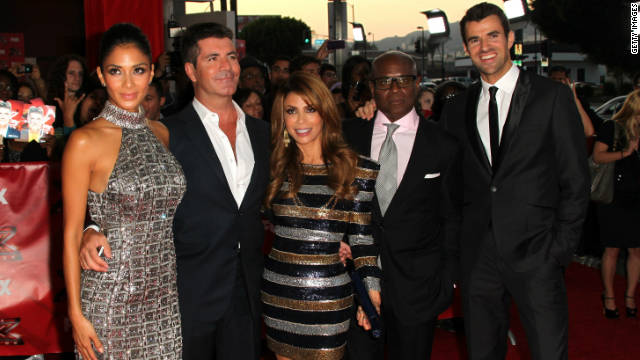 (CNN) -- Having watched as countless contestants said their goodbyes on season 1 of "The X Factor," judges Paula Abdul and Nicole Scherzinger and host Steve Jones will now do the same, without so much as a highlight reel to play them off.

Fox recently confirmed that Jones and Scherzinger would not return for the show's second season.

And on Tuesday afternoon, Abdul addressed speculation that she too would be leaving the show: "Yes, it's true; I won't be returning to 'The X Factor' next season," she said in a statement. "I want nothing more than for 'The X Factor' to exceed ALL of their wildest dreams. This truly has been a blessing and I am most grateful."

With only series creator Simon Cowell and record exec L.A. Reid left at the judges' table, the singing competition will look very different when it returns next season.

And the facelift is necessary, said Phil Gallo, Billboard's senior correspondent for film and TV.

"(Cowell and Reid) were cheerleader types," he said. "The commentary Nicole produced was not as strong as the others, and going in, you already knew Paula wasn't going to be that harsh. (Having) two people (occupy) that space ultimately watered down the effect.

"Nicole won't be missed," he added.

The Fox singing competition show garnered respectable ratings, fluctuating from 8.5 to 12.5 million viewers week after week. However, despite winning its time slot and becoming fall's No.1 unscripted program, "The X Factor" fell short of expectations.

"The Voice" received similar ratings its first season, from April 26 through the end of June. But there's a reason the new NBC show earned more acclaim than its Fox counterpart: Fall shows need to have higher ratings to be considered competitors, Gallo said.

"If 5 million people are watching summer shows, execs are thrilled to death," Gallo added, noting that "The Voice" far exceeded that number.

Less-than-enthusiastic reactions to "The X Factor" might also have been brought on by Cowell's out of reach expectations for the program. Before the show's U.S. debut, Cowell told The Hollywood Reporter that based on the show's success in the U.K., he'd consider anything less than 20 million viewers to be a disappointment.

And while Cowell and Abdul played off each other well on "Idol," "(Abdul's) appeal is on the wane," Gallo said.

Death threats she and Scherzinger received after voting off favorite contestant Drew Ryniewicz on December 1 could have something to do with it.

One week later, Rachel Crow's exit -- the 13-year-old famously dropped to her knees and buried her face in her hands upon learning that she'd been eliminated -- elicited even more criticism.

While Cowell ran to comfort the crying teen, Scherzinger wept in her seat, and a straight-faced Jones scratched his head and cued the farewell montage.

Displeased with Jones' reaction, one Yahoo contributor wrote: "Fellow contestant Marcus Canty spread his arms in an attempt to help the young pop star. Instead, Jones prevented him and redirected him off the stage. ... This was not the only moment in which Jones showed his heartlessness. When (Crow) was still bursting with tears ... Jones asked Crow her thoughts now that she was eliminated. This is a 13-year-old girl we are talking about."

"People are going to compare what any host does to what ("American Idol" host) Ryan Seacrest does," Gallo said. "Ryan tends to have a little bit more warmth. ... Steve brought a little too much of that traditional British cold that American audiences don't always warm up to."

Jones' and Scherzinger's dismissals were deemed unsurprising by Deadline's Nikki Finke, who wrote, "(They) had been considered the weakest links and likely casualties going into Season 2 after receiving mostly negative reviews for their performances last season."

Though for Finke, Abdul's exit came as more of a shock: "It'll be interesting to see if there's any backlash against Simon because of Paula's popularity."

This is the second time Cowell and Abdul have parted ways on reality TV. She left "Idol" after eight years as a judge alongside him and Randy Jackson.

"I've learned through my longevity in this industry that business decisions often times override personal considerations," Abdul said in a statement, adding, "Simon is, and will remain a dear friend of mine and I've treasured my experience working this past season with my extended family at Fox and Fremantle."

In addition to fresh star power, Gallo said, "X Factor," which focused on finding a contemporary pop star, would benefit from a less-confined point of view.

"Look at 'Idol,' " he said. "There's a country presence. And an old rock 'n' roll guy sitting on the judges' panel. 'The Voice' has Cee Lo with his background and Blake Shelton bringing in a country element. In the long run, 'The X Factor' winds up looking like the most limited show."