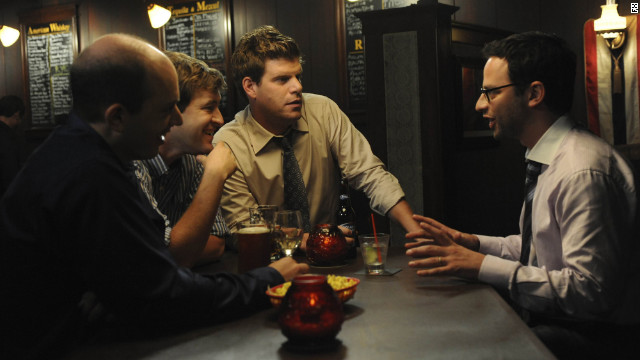 (CNN) -- Chances are, there are some people in your life who spend a whole lot of their free time fiddling on the computer, tinkering with their phones in public settings, and yelling at the television when players perform poorly for professional sports teams that they supposedly hate.

Yes, fantasy sports has become as much of a pastime as the actual playing of real sports in real life, and a testament to its power is FX's "The League," a half-hour sitcom that follows a group of 30-something males (and one female) as they negotiate their own careers and adulthood by going to any length to sabotage their opponents en route to victory.

"The League" was created by "Seinfeld"/"Curb Your Enthusiasm" vet Jeff Schaffer and his wife, Jackie Marcus Schaffer. Both serve as writers, directors and producers for the show. "It's not just a sports comedy. If you know nothing about fantasy football, you're still going to laugh your ass off," Jackie says.

"The League" concluded its third season late last month and enjoyed its best numbers to date. Comedy heavyweights such as Seth Rogen, Sarah Silverman, Jeff Goldblum and Will Forte all made guest appearances alongside NFL players Maurice Jones-Drew, Matt Forté and Sidney Rice.

With the actual playoffs now in full swing, as well as a fourth season for the show slated for next fall, CNN spoke with the Schaffers about the show's success and the subtle differences between a fantasy football joke and a fantasy league joke.

CNN: How did the initial pitch for a show about fantasy football go?

Jackie: In television, they won't really let you through the door unless you have something of an organizing principle. For us, a fantasy football league is an adult male or co-ed book club. Thirty to forty million people play, and they just don't play -- they're obsessed with it. We like to say the show is a comedy about people who play fantasy football, not a comedy about fantasy football. We were lucky that FX saw that. The fantasy football concept is just an excuse for the characters to behave like villains and babies every week.

Jeff: For us, people go "Oh, my God, how can you do a show about fantasy football?" But 35 million people playing something is not a niche.

CNN: Jeff, you've worked on "Seinfeld" and "Curb Your Enthusiasm." Now that there's three season of "The League," what's different about the comedic styles?

Jeff: "The League" is written and produced the same way that "Curb" is written and produced. And "Curb" was basically written the same way "Seinfeld" was. All of it is based on stories and interweaving those in a satisfying half-hour. It may seem a little different, because the problems of Larry David are not necessarily the problems of every man. But Larry, who watches the show and enjoys it, he'd say, "We should do this" and I'd say, "No, we did that on 'The League.'"

Jackie: The dirty little secret is that "Curb" and "Seinfeld" are much cleaner shows. I'm the one with the dirty sense of humor.

CNN: "The League" has slowly gained a fanbase of these last years. What's been critical to its success?

Jackie: We make our show for about $750,000 per episode, in about three days. All on location, no set. And we have six leads. It's a mad dash to make the show, but FX does not have big marketing budgets for their comedies. We are completely relying on word of mouth.

Jeff: What (FX President) John Landgraf said to us: "We need shows that can make their own noise." Which is fine, and they leave it up to us to make our own noise. Our fans are very loyal and passionate and funny, and they've seemed to embrace the show like it's their secret. People feel very possessive of it and they want to show you this thing that they love.

CNN: You also have this perfect storm, where the season airs during NFL season and fantasy football leagues are in full swing.

Jackie: It's a funny show about a shared passion.

Jeff: The audience is growing, and we're super-excited for season four. And we're Tebowing that there will be a season five.

CNN: The third season seemed to rely less on fantasy football jokes and went into the guys' lives in a broader sense.

Jackie: I think what happens when you get to the third season of a show, their lives begin to get fleshed out. For example, since the first season, we've talked about the lure of Andre's sister being this sexual mentor to the guys. As we continue to make those jokes, we decided to make room to meet her. You have the stories that you want to tell, but you also have the deep history and the lure that you want to start parceling out. The hardest thing about making the show is the time. We have 20 minutes and 45 seconds. With Jeff and "Curb Your Enthusiasm," they have the luxury of making it however long they feel like making it. We try to do a lot of fantasy lines and jokes, and some are more heavy than others.

Jeff: There may have been less stories about fantasy football-specific stuff, but I thought there were just as many fantasy league stuff. The whole arc of the season is that they've cheated in the draft order. That's not a specific story like the one where Pete's girlfriend won't let him play Michael Vick. We try to make the whole season about the league dynamic.