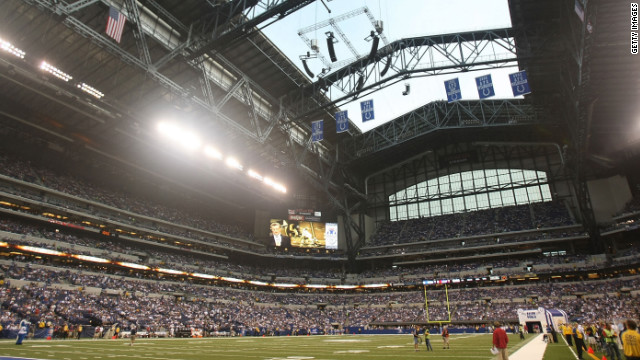 Some 150,000 people are expected to flood into downtown Indianapolis where the game will be played at Lucas Oil Stadium.

A team of strategists, analysts and techies will monitor the digital fan conversation via Facebook, Twitter and other platforms from a 2,800-square-foot space downtown. The station was set to open on Monday and run through Super Bowl XLVI on February 5.

The team will tweet directions to fans in search of parking, direct visitors to Indianapolis's best attractions, and stand by to provide information in case of a disaster.

"Social media is just how people interact now," said Taulbee Jackson, CEO of Raidious, the digital marketing agency that the Super Bowl's host committee tapped to manage the communications hub. "We felt it was critical to have some horsepower behind that aspect of the Super Bowl here, versus what you might have seen from other Super Bowls."

Some 150,000 people are expected to flood into downtown Indianapolis -- where the game will be played at Lucas Oil Stadium -- over Super Bowl weekend.

Advanced search tools and analytics will help Jackson and his team identify fans in need of help by indexing key words and phrases. For example, a fan won't need to tweet, "where can I find parking?" to get help; Raidious operatives will be able to pick up on a general phrase such as "parking sucks" to offer assistance.

But it won't be a simple operation. The command center will utilize more than a mile of Ethernet cable and more than 150 square feet of networked screen space. More than 20 people will man the center for 15 hours per day.

Researchers from nearby Ball State University's Center for Media Design will conduct a study of the command center, analyzing its strengths and weaknesses. Michael Holmes, director of the center's Insight & Research Unit, wrote in an email that the command center is an example of the "the ubiquity of social media and the absolute necessity for companies, organizations and communities to use these tools to improve their relations with their customer, audiences and citizens."

Both Holmes and Jackson said they would not be surprised if the Super Bowl's first designated social-media warroom sets a precedent for other major events.

"We're kind of breaking new ground here so we don't know the exact numbers yet of what we'll be dealing with, but we should be able to provide that after the game to other cities that have to deal with these types of issues," Jackson said. "I think a lot of brands will start to see a need for something like this."