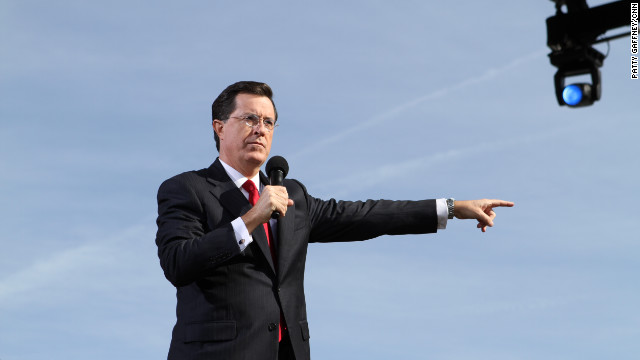 Comedian Stephen Colbert at the "Rally to Restore Fear and/or Sanity" in 2010 in Washington, D.C.

Editor's note: Dean Obeidallah is a comedian who has appeared on Comedy Central's "Axis of Evil" special, ABC's "The View," CNN's "What the Week" and HLN's "The Joy Behar Show." He is executive producer of the annual New York Arab-American Comedy Festival and the Amman Stand Up Comedy Festival. Follow him on Twitter.

(CNN) -- Stephen Colbert -- host of "The Colbert Report" and unabashed right wing radical -- is now considering running for President of the United States of America.

Simply put: Colbert must be stopped! He is an existential threat to our way of life and to the exceptional nature of our nation.

I know some will dismiss the threat posed by Colbert -- these apologists will defend him as "harmless" or say he's no more than "a charismatic speaker" -- but that is exactly what they said about Hitler.

We need to wake up to the fact that Colbert's poll numbers in South Carolina -- the location of the next Republican primary -- are rising. He is now at 5%, placing him ahead of former Utah Gov. Jon Huntsman.

Yes, some will scoff at Colbert running ahead of Huntsman -- a candidate running below the margin of error in some polls, meaning he may have zero support or may actually owe votes -- but keep in mind that in the recent Iowa caucus, Huntsman received 745 votes.

Translation: Colbert is for real.

Colbert has not been hiding his extreme views. Night after night (or four nights a week to be exact) Colbert has been spewing his venom. However, for some reason, the media have given him a free pass.

But that ends now. Here are Colbert's positions on the key issues -- I warn you, they are scary:

-- Unemployment: "Suck it up, unemployed. It is your own damn fault that you don't have a job ... So stop scapegoating Wall Street." Do we really want an American president who sides with Wall Street over workers?

-- Corporate taxes: "If we raise taxes on corporations, what incentive will they have to make money other than the fact that it's the sole reason they exist." Colbert is clearly in the pocket of big business -- I bet his super PAC is funded by big businesses like hedge funds and casino owners.

-- Government helping Americans in need: "I believe in pulling yourself up by your own bootstraps. I believe it is possible. I saw this guy do it once in Cirque du Soleil. It was magical!"

-- Gays: "There is nothing wrong with being gay. I have plenty of friends who are going to hell." Even Rick Santorum would not say this (at least not in public.)

-- America's role in world: "If our Founding Fathers wanted us to care about the rest of the world, they wouldn't have declared their independence from it." Under a Colbert administration, it appears America would just attack other countries for no valid reason.

-- Immigration: "This is America. I don't want my tomato picked by a Mexican. I want it picked by an American, then sliced by a Guatemalan, and served by a Venezuelan in a spa where a Chilean gives me a Brazilian."

And he advocates arresting illegal immigrants and throwing them in "jail -- then we can force them to pick our crops as prison labor."

-- Civil rights: "I just think Rosa Parks was overrated. Last time I checked, she got famous for breaking the law." Even Ron Paul, whose past newsletters contained racist comments, would be appalled by this callous remark.

-- Muslims: "Every permit granted to a mosque is one denied to an American house of worship." Colbert is to the right of Newt Gingrich on this issue, and keep in mind Newt has compared Muslims to Nazis.

These above quotes are clearly the words of a man with no regard for the values of our great nation. Why do the media coddle Colbert just because he labels himself a "comedian"? Hitler told jokes -- does that mean he was OK?

And not only are Colbert's views on the radical fringe of American society, I don't trust him. Why? Because his positions on the issues have remained constant. He doesn't waver or have multiple opinions on the same issue.

In contrast, a person like Mitt Romney has evolved over time and has been on both sides of issues like abortion, gay marriage and health insurance. (Romney should embrace this with the campaign slogan: "Me, too!")

Colbert has only two qualities I like: 1. He's a friend of Jon Stewart and 2. He has good hair. Besides that, he is a danger to our Republic.

And let's not forget that Colbert admitted that he makes up facts to support his own political arguments, as he gleefully boasted once: "I can't prove it, but I can say it."

America cannot afford a man with the views of Stephen Colbert running our nation. Colbert doesn't belong in the White House, instead he belongs on basic cable right before reruns of "Scrubs."

The opinions expressed in this commentary are solely those of Dean Obeidallah.