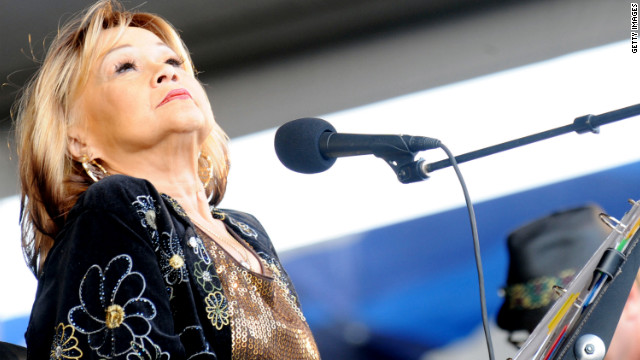 A private funeral has been planned for Saturday for the late soul singer Etta James.

(CNN) -- The funeral for Etta James, the legendary singer whose earthy vocals bridged genres from blues to rock, was set for Saturday at a Southern California cemetery, the family said.

The Rev. Al Sharpton was to preside over the private service for family and friends at Greater Bethany Community Church City of Refuge in Gardena.

Fans got the opportunity Friday to bid farewell to James during a public viewing at the Inglewood Cemetery Mortuary. Hundreds of people waited for hours to sign registers and attend the viewing for James, who died last Friday at the age of 73 from complications due to leukemia.

The family has requested donations be sent to The Rhythm & Blues Foundation.

James was diagnosed with leukemia in 2010, and also suffered from dementia and hepatitis C. She died at a hospital in Riverside, California. She would have turned 74 on Wednesday.

Her assertive, earthy voice lit up such hits as "The Wallflower," "Something's Got a Hold on Me" and the wedding favorite "At Last."

The powerhouse singer, known as "Miss Peaches," first hit the charts as a teenager, taking "The Wallflower (Roll With Me, Henry)" -- an "answer record" to Hank Ballard's "Work With Me, Annie" -- to No. 1 on the R&B charts in 1955.

She joined Chess Records in 1960 and had a string of R&B and pop hits, many with lush string arrangements.

After a mid-decade fade, she re-emerged in 1967 with a more hard-edged, soulful sound.

Throughout her career, James overcame a heroin addiction, opened for the Rolling Stones, won six Grammys and was voted into the Rock and Roll Hall of Fame.

Despite her ups and downs -- including a number of health problems -- she maintained an optimistic attitude.

"Etta James is unmanageable, and I'm the closest thing she's ever had to a manager," Lupe De Leon, her manager of 30-plus years, told CNN.

"If you were to look up the word 'singer' in the dictionary, you'd see their names," Adele said in an interview.

Etta James was born Jamesetta Hawkins in Los Angeles to a teen mother and unknown father. She suspected her father was Rudolph Wanderone Jr., the famous pool hustler known as Minnesota Fats.