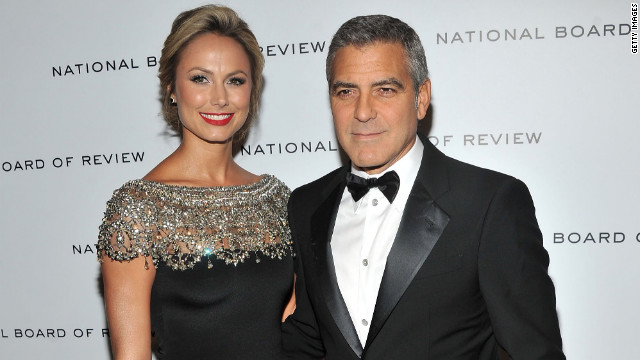 Stacy Keibler and George Clooney attend the 2011 National Board of Review Awards Gala.

(PEOPLE.com) -- Stacy Keibler could get used to Hollywood's award-show season.

"I have the best date in the whole world," Keibler, 32, told PEOPLE Tuesday at New York's Cipriani 42nd Street, where boyfriend George Clooney nabbed the best-actor award from the National Board of Review for his role in "The Descendants."

The couple, recently returned from Mexico, looked stunning -- she's a tad taller in heels and looking leggy, with her hair up -- as they walked the red carpet arm in arm. "I did the zipping part," Clooney, 50, said of Keibler's dress. "Which does require some skill."

But he took some time on his own appearance, with his crisp tux and flawless coif. "It takes hours just to glue on my hair," Clooney quipped.

"He always looks good," Keibler added. "No matter what he wears."

So, how many times has Keibler seen "The Descendants?" "I think I've seen it four times," she replied. "I really love that scene where George is running down the hill. I think it's hilarious, because he doesn't run anything like that."

If Clooney and Keibler seem like the perfect couple, perhaps they are.

"Stacy is a superwoman," said Shailene Woodley, who plays Clooney's daughter in the film. "She's super passionate and philanthropic. She's just a happy person, a happy individual ... and so is he."

So, Keibler had a good night? "It's so fun," she admitted.

As award season progresses, there should be more where that came from.